Why Do We Enjoy Being Scared? [New Research] - BioTechniques

Enjoying fear does not only come from the adrenaline spike that drives the fight or flight response as commonly believed, but rather from a rewarding molecule associated with much more pleasant emotions. 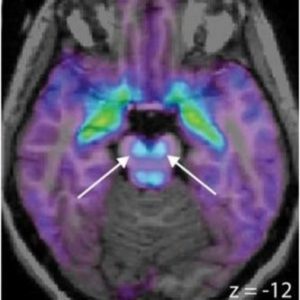 Dopamine being expressed in the midbrain of human subject (2).

There is an inevitable rush–a thrill–that comes with a good scare. Some people seem to enjoy that rush and even seek it out by watching horror movies, attending frightening Halloween exhibits, or even riding roller coasters, whereas others dread the very idea of these activities. The desire for and the rush from these thrilling situations are often chalked up to a surge of adrenaline during the activation of the primitive fight or flight response. However, there is a lesser known culprit, one more deviously hiding, that links both our desires and fears. Dopamine is often thought of as a pleasure-inducing chemical, but Kent Berridge and his colleagues at the University of Michigan made the startling discovery that dopamine may also induce fear.

Berridge’s team initially set out to trigger an intense desire to eat in rats by microinjecting the nucleus accumbens with a drug that blocked glutamate receptors. Other groups had reported success using this approach, but when Berridge’s team tried, they triggered intense desire to eat in some rats, but others refused to eat and showed signs of extreme fear and even aggression.

The researchers identified different sites within the nucleus accumbens where the drug microinjections produced desire or fear by tracking plumes of Fos protein, which become elevated in neurons in response to the glutamate blocking drug and can be used as a marker to map the drug’s spread and impact. In the rats with an intense desire to eat, Fos plumes were mostly in the front of the nucleus accumbens, whereas in fearful rats that would not eat, Fos plumes were in the back of the nucleus accumbens. “We kind of had this anatomical keyboard of valence, a gradient,” Berridge said. “As you moved from the front to the back, it became increasingly less desire and more fear. You could also get both in the same rat, right in the middle.”

The researchers suspected that dopamine was involved because it normally plays a role in desire, so they added a dopamine blocking drug to the brain microinjection along with the glutamate blocker and found that this eliminated both the fear and desire responses (1).

“What this tells us is that there is a kind of fear that is very related to desire for reward from the brain’s point of view and it [acts] through dopamine mechanisms,” said Berridge. But that fear response can be tuned so that it becomes either pure desire, pure fear, or a mixture of both. And our psychological perception of the world at the moment has a big influence in determining which response occurs.

Dopamine may also explain why some people enjoy fear more than others. David Zald from Vanderbilt University, who studies the neural and neuropharamacological systems involved in emotion and motivation, found that people with fewer dopamine autoreceptors, which help regulate and inhibit the release of dopamine, are more likely to engage in thrilling or frightful activities (2). With less regulation, these individuals produce more dopamine, resulting in a greater sense of reward. “We increasingly think of dopamine as not signaling the experience of pleasure as much as signaling the experience of wanting–of anticipating a potential reward,” said Zald.

Dopamine plays a key role in the balance between a potential reward and a potential threat, but it is not the only component. “I think of dopamine as a modulator that contributes to individual differences in this behavior rather than it being the sole piece of the system,” said Zald.

Genetics could also play a part, but the exact balance between heritability and the effects of the environment on the individual are not known at this point. According to Zald, there is likely a whole host of areas in the brain involved with emotion, fear, and anxiety as well as in the decision to approach or avoid a thrilling situation.