Before their disappearance from the fossil record, Neanderthals interbred with ancestors of present-day humans, leaving a gene-flow legacy that persists in modern human DNA. By combining genetic and neuroimaging data, researchers recently shed light on the neural implications of this inheritance. 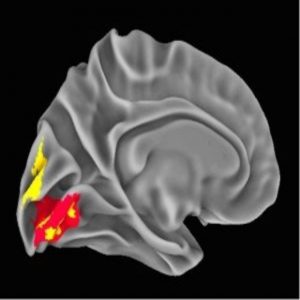 Neanderthals went extinct approximately 40,000 years ago, yet much of their DNA lives on in the genomes of modern humans. Neanderthal alleles most likely entered the human genome in Eurasia as modern humans ventured out of Africa 47,000–65,000 years ago. The Neanderthal genome sequence revealed that approximately 2% of the ancestry of each non-African modern human traces to ancient gene flow from Neanderthals. The neural implications of this inheritance from the ancient hominin lineage most closely related to modern humans have not been entirely clear. However, Neanderthal alleles have been associated with a range of clinical traits, including depression and tobacco use.

At the National Institute of Mental Health, Karen Berman and Michael Gregory are intrigued by the functional implications of Neanderthal-derived variants that survive in modern human DNA. They figured that if these alleles are biologically meaningful for their modern bearers—and by extension, for their extinct originators—individuals endowed with greater proportions of Neanderthal-derived sequence differences might be expected to harbor Neanderthal-like phenotypes. To test this hypothesis, Berman and Gregory recently examined common variant genotype data acquired from more than 200 healthy individuals of self-reported European-descent who underwent magnetic resonance imaging of the head.

“The main focus of all of our work is integrating genetic and neuroimaging data to uncover how the human brain functions and develops,” Gregory said. “This work offers a unique perspective about our origins and provides a view with greater scale than other aspects of our work—specifically how these genetic mechanisms developed and modified our brains, behaviors, and cognitive abilities through the last 100,000 years or more.”

As reported in Scientific Reports, Berman and Gregory found that the number of Neanderthal-originating polymorphisms carried in living humans is related to cranial and brain morphology (1). According to the authors, this work provides insights into ancestral human neurobiology and suggests that Neanderthal-derived genetic variation is neurologically functional in the contemporary population.

“We would hope a general audience will understand that genetic contributions from Neanderthals, still present and measurable in living people today, continue to have effects on our brain and skull shapes,” Gregory said. “More broadly, it implies that Neanderthal-derived DNA is active in living humans today and affects the way our brains function, which should, in turn, affect the ways we think and behave.”

The researchers then used an algorithm to create 3-D skull models for the participants. They demonstrated that a greater load of Neanderthal-derived genetic variants (a higher NeanderScore) is associated with skull shapes resembling those of known Neanderthal cranial remains, particularly in occipital and parietal bones. “We looked for differences in the amount of Neanderthal-derived DNA between people living today and asked whether areas of the skull might be affected by this,” Gregory explained. “To our surprise, we were able to see the same pattern of differences as found comparing Neanderthal and modern human fossils from nearly 100,000 years ago.”

The team next assessed brain structure by measuring gray- and white-matter volume, regional sulcal depth, and the local gyrification index. Regional sulcal depth measures the extent to which each fold of the brain descends into the underlying mantle. The NeanderScore positively correlated with an increase in sulcal depth in the right intraparietal sulcus, directly beneath the area of maximal change in the prior skull-shape analysis, suggesting a significant but localized impact of Neanderthal genetic load on the modern human brain.

The local gyrification index provides a measure of the regional complexity of cortical folding, and is highly modified throughout evolution. The NeanderScore positively correlated with the local gyrification index in early visual regions in the left hemisphere, as well as with the right superior temporal sulcus, such that cortical complexity, and thus cortical surface area, increased with NeanderScore.

“It’s been proposed that Neanderthals depended on visual-spatial abilities and toolmaking for survival—more so than on the social affiliation and group activities that typify the success of modern humans—and that Neanderthal brains evolved to preferentially support these visuospatial functions,” Berman said. “Now we have direct neuroimaging evidence that such trade-offs may still be operative in our brains.”

To the extent that characterization of Neanderthal variations in present-day people can provide insights into archaic human phenotypes, this work can form the basis of future studies aimed at a more thorough understanding of Neanderthal biology. According to the authors, Neanderthal gene flow into modern humans is not only of evolutionary interest but may also be functional in the living Homo sapiens brain, revealing novel genetic influences on neurodevelopment of the visuospatial system. For their own part, Berman and Gregory are currently working on further studies documenting the pivotal role of genetic variation in shaping the insula and related social brain circuitry.

“This line of research holds the potential for many future paths,” Gregory said. “First, we hope to extend these findings to other modern human populations with Neanderthal ancestry, as well as to examine effects of admixture with other archaic species, such as Denisovans. Additionally, since there are significant hypothesized differences in the cognitive abilities of Neanderthals and modern humans, particularly with respect to social versus visuospatial functioning, we hope to determine whether Neanderthal-derived DNA specifically impacts these cognitive domains and the brain networks underlying them.”

How is Ebola spread?