While investigating ancient DNA from the extinct straight-tusked elephant, researchers discovered facts that could cause a giant-sized shakeup of the evolutionary tree. 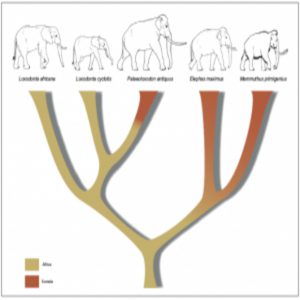 The straight-tusked elephant (Palaeoloxodon antiquus) may have last roamed Eurasia over 30 thousand years ago, but the long-extinct species is now trumpeting a new twist in the tale of elephant evolutionary history.

“Paleontologists long believed the straight-tusked elephant was sister to the Asian elephant lineage because of similarities in bone structure and geography of fossils, so we initially thought that ancient DNA would help provide details about the divergence of these two species,” said Michael Hofreiter, who led the study published in eLIFE. “But when our data began to reveal that the straight-tusked was actually sister to the African forest elephant, we started to realize that this study was basically redrawing the evolutionary tree for elephants.”

Hofreiter’s team obtained DNA sequences from fossils of 4 straight-tusked elephants between 120,000 and 240,000 years old, which were recovered from 2 separate sites in Germany. They sequenced and compared straight-tusked elephant mitochondrial DNA and nuclear DNA sequences with sequences from the three living elephant species and the extinct mammoth, which were obtained from public database records.

“The big question we had was whether we could find samples that were well enough preserved,” explained Hofreiter. “Fragments are always short on ancient DNA, but the data we got came from fragments that were nearly at the limit of what we could still analyze with next-generation sequencing.”

The data also challenged previous beliefs that African elephants have been constrained to Africa, highlighting that they migrated to Eurasia along with the mammoth and Asian elephant around 750,000 years ago.

“Because we moved the straight-tusked elephant from the Asian lineage to the African lineage, that also meant that African elephants in fact left Africa, which many people didn’t think true,” said Hofreiter. “This changes a lot of the elephant evolutionary picture we had. One thing this study reminds us is that evolution always keeps surprises waiting.”