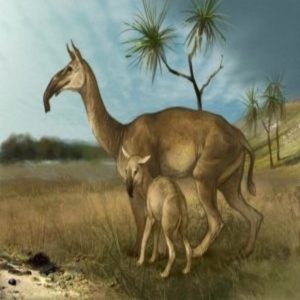 In 1834, Charles Darwin discovered fossils in Argentina from an odd creature later named Macrauchenia patachonica by paleontologist Richard Owen, who examined the bones after Darwin’s return to England. Darwin initially speculated that the extinct animal might be a mastodon, but Owen believed it more likely resembled a llama or camel. Over the years, fossil analysis has suggested that Macrauchenia was quite large—possibly 10 feet tall and weighing over 1 ton—with a camel-like body, supporting Owen’s view, and a short elephant-like trunk for a nose. Unfortunately, even with the help of modern technology, scientists were unable to determine Macrauchenia’s relatedness to known species or assign it to a specific evolutionary lineage.

Now, Michi Hofreiter, a paleogenomics expert at University of Potsdam in Germany, Ross MacPhee, a mammalogist and curator at the American Museum of Natural History, and their multinational team present new insights into Macrauchenia’sposition in the evolutionary “tree of life,” which they gained though sequencing ancient DNA (aDNA) from a partially fossilized bone specimen. Their findings were published in Nature Communications.

“We had a difficult problem to solve here: Macrauchenia doesn’t have any really close living relatives,” explained lead author Mick Westbury in a press release. “Because ancient DNA is so degraded and full of unwanted environmental DNA, we rely on being able to use the genomes of close relatives as a kind of scaffold to reconstruct fossil sequences.”

Further complicating the matter, the Macrauchenia bone samples used in the study were found in temperate regions, where aDNA is more likely to be degraded. In fact, of the six bone samples from different sites that the authors tested, only one, found in a cave in Chile, yielded Macrauchenia DNA suitable for sequencing.

There are many challenges in the analysis of aDNA; chief among these are the small quantities of available source material and potentially high levels of DNA degradation into a multitude of small DNA fragments. While PCR and next-generation sequencing (NGS) technologies can address the first problem, sequence assembly from many short reads, particularly when no closely related reference genome is available, remains a major obstacle in genomic analysis of aDNA.

“For this study, we devised a new approach involving iterative mapping that relies on using very strict parameters and the mitochondrial genomes of a number of living species as multiple reference points to more reliably predict the fossil’s most likely genetic sequences,” said Westbury. After initially mapping reads to a bait reference sequence from a distantly related modern species, the researchers generated a consensus sequence that they then used as the new reference sequence. This consensus reference sequence was updated over multiple iterations of the mapping process until all available reads were mapped. After careful optimization of this technique, the authors generated an assembly covering nearly 80% of the Macrauchenia mitochondrial genome.

“Mitochondrial DNA is very useful for evaluating the degree of relatedness among species,” Hofreiter said. “Our study corroborates and extends the results of another molecular investigation, published two years ago, which utilized the protein collagen to infer relationships. Like that study, ours found that the closest living relatives of Macrauchenia are in the placental order known as Perissodactyla, which includes horses, rhinos, and tapirs.”

Having verified the taxonomy of Macrauchenia among known species, the authors used the mitochondrial sequence and molecular clock analysis to determine that the species diverged from other members of order Perissodactyla approximately 66 million years ago. This timing corresponds with the end of the Mesozoic era, which is marked by the mass extinction of dinosaurs, and the beginning of the (current) Cenozoic era.

MacPhee, however, cautioned against making quick judgments about a cause-effect relationship based on timing alone: “While the coincidence with the extinction of non-avian dinosaurs was not lost on us, molecular clock dating is more like a sundial than a digital watch—it’s just not that precise. While fossils certainly support the idea that the modern orders of placental mammals really began to diversify around this time, molecular evidence suggests that their broader relationships go back into the late Mesozoic, before the big die-off. The deep lineages that make up [Perissodactyla] are certainly consistent with this idea, but we need to find the fossils to document it.”

How felines found their way