A device can artificially stimulate taste on your tongue with all the sensation and none of the calories by using temperature changes and electrical currents. Sound sweet? 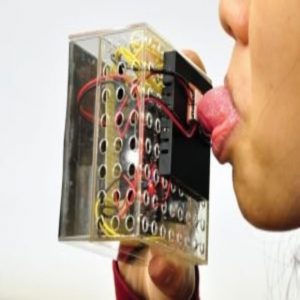 In Charlie and the Chocolate Factory, bratty Golden Ticket-winner Violet Beauregarde pops a piece of chewing gum in her mouth and replicates the flavors of a delicious three-course meal on her taste buds. While many of Willy Wonka’s creations, such as everlasting gobstoppers, remain fictional, tasting through virtual reality is now at the forefront of some researchers’ interests.

A new study presented at the 2016 Association for Computing Machinery User Interface Software and Technology Symposium used thermal regulation to replicate the sensations of sweet taste on the tongue (1), building on previous work where electrical stimulation was used to simulate taste.

“My interests lie with virtual reality technologies. We can communicate using artificially replicated sensations through audio, visual, and haptic. But taste can only be created with the help of chemicals,” said Nimesha Ranasinghe, lead author of the study and a research fellow at the National University of Singapore. “We have devised a framework that will allow us to simulate these taste sensations.”

Ranasinghe and his team focus primarily on taste. This is unlike flavor, which is generated through both taste and smell. Back in 2012, they electronically stimulated volunteers’ tongues to successfully replicate sour, salty, and bitter tastes by placing an electrode on the anterior tip of all volunteer’s tongues, which heightened sensitivity (2). The team generated electrical pulses with predetermined magnitudes of current from 20 to 200 micro Amps and frequencies of 50–1000 Hz. Participants described their perceived sensation of taste through a rating system.

Ranasinghe’s team found strong evidence that salty and sour taste was simulated through these pulses, with moderate evidence of bitter taste but very limited evidence of sweet taste replication through electrical stimulation.

“Mimicking the taste of sweetness is important to us,” explained Ranasinghe. “Excessive consumption of sugary foods can detrimentally affect health and lead to health concerns such as obesity. If we can introduce the sensation as a digitally controllable media, we could majorly impact individual health in a positive way.”

Hope for the sweet taste of success was not misplaced. “Pilot studies were supported by previous research that showed that the perception of sweetness can be enhanced due to the activation of the TRPM5 ion channels, which can be affected by thermal stimulation (3),” said Ranasinghe.

Using a Peltier module and a heat sink placed on participants’ tongues, Ranasinghe’s team altered the temperatures between 20 and 30 degrees Celsius in fixed cycles. Participants rated their perception of sweet taste using a five-point rating scale. Overall, respondents detected mild levels of sweetness through this stimulation.

Interestingly, some volunteers also reported mixtures of sensations of minty flavors. “A major challenge is that we do not understand how tastes are created within the brain. With vision, we understand that red, blue, and green are primary colors and can be mixed to create secondary and tertiary colors. We are not familiar with a corresponding system or even have a framework for how we process taste within neural networks,” said Ranasinghe. This reflects the limited knowledge we have of the olfactory system, with our basic understanding of olfaction constantly changing and neurogastronomy only emerging recently as a research field.

Despite these challenges, Ranasinghe will continue to refine his technologies. “We can fine-tune these tastes to include modalities such as spicy or mint. We are also now looking at non-linear increments when altering the current. One day, electrodes could be embedded into a mug, so when an individual drinks water, they get a sweet taste.”

Augmented reality and the life sciences