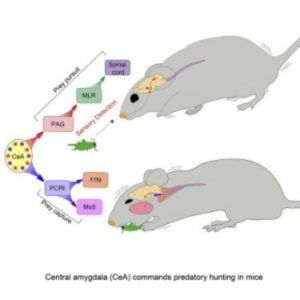 The emergence of articulated jaws armed vertebrates with superior predatory skills, promoting their evolutionary success and eventually placing them at the top of the food chain. This major event in vertebrate evolution was accompanied by the development of novel neural networks capable of coordinating movements during active hunting. But until now, the brain regions and neuronal pathways that control vertebrate predation were largely unknown.

A new study in Cell shows that two neuronal pathways originating in the emotion center of the brain coordinate distinct behaviors necessary for efficient predatory hunting. Using optogenetics, researchers stimulated these two pathways in mice to elicit either pursuit or biting attacks on both live and artificial prey.

“The central amygdala seems to allow the animal precise control over the muscles involved in pursuing and capturing prey,’’ said senior study author Ivan de Araujo from the Yale University School of Medicine.

A previous study showed that hunting prey produces greater activation of neurons in the central nucleus of the amygdala than do surges in food intake. Moreover, the central amygdala, which plays a prominent role in fear and anxiety behaviors, sends neuronal projections to other evolutionarily primitive brain regions that control craniofacial movements. “This area was perfectly compatible with an activation system that drives the motor behavior associated with hunting,” de Araujo said.

To test this idea, de Araujo and his team used optogenetics to stimulate the central amygdala in mice, which provoked them to hunt crickets and bug-like robots as well as other types of artificial prey, including sticks, tape rolls, and bottle caps.

“We’d turn the laser on and they’d jump on an object, hold it with their paws and intensively bite it as if they were trying to capture and kill it,” de Araujo said.

In subsequent experiments, the researchers found that two separate neuronal pathways originating in the central amygdala control distinct hunting behaviors. Optogenetic stimulation of neuronal projections to the reticular formation in the brainstem, which contains neurons that are important for controlling neck, jaw and forelimb movements, induced fictive feeding behaviors. Mice in empty cages sat back on their haunches, brought their elbows inward periodically as if holding food with their forepaws, and displayed rhythmic oral movements.

Meanwhile, optogenetic stimulation of projections to the periaqueductal gray matter in the midbrain, which plays an important role in reducing pain sensitivity under stress, triggered pursuit behavior. Specifically, activation of these projections increased pursuit velocities and shortened both the latency to pursue and overall hunting duration. However, only combined stimulation of projections to both the reticular formation and the periaqueductal gray matter enabled robust predatory attacks on prey.

The team is now exploring the sensory input into the amygdala to determine what triggers predatory behaviors and how the pursuit and kill pathways are coordinated. “We now have a grip on their anatomical identities, so we hope we can manipulate them even more precisely in the future,” de Araujo said.

Sleep vs sex: how to settle the debate

Pet dogs to the rescue

What lets parrots get down to monkey business?