A new single-cell RNA-seq transcriptome profiling technique allows researchers to quickly characterize the wide variety of cells comprising tumors, along with neighboring stromal and immune cells in the tumor’s microenvironment. 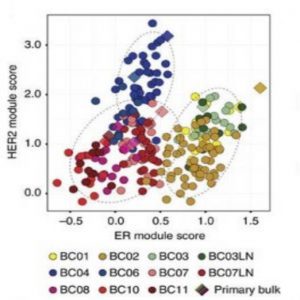 As recently reported in Nature Communications, Woong-Yang Park from the Samsung Genome Institute in South Korea and his research team analyzed the transcriptomes of 515 single cells from 11 patients with four different breast cancer subtypes: luminal A; luminal B; HER2; and triple negative breast cancer (TNBC). Inferred copy number variations (CNV) from the single-cell RNA-seq data helped the researchers identify distinct cancer populations, each characterized by a unique pattern of gene expression. For example, the team discovered that TNBC cells expressed more aggressive cancer signatures such as genes involved with epithelial–mesenchymal transition and angiogenesis.

“Finding these T cells in there is pretty exciting because they give a clue as to why the cancer got out of control and also present a way to target tumors therapeutically,” said John Beausang, a genomicist at Stanford University who was not involved with the study.

Park and his team plan to focus next on using their single-cell technique to profile other cancer types such as lung cancer.