Do Identical Twins Have the Same DNA? - BioTechniques

Do identical twins have the same DNA? Despite the seemingly identical DNA coding sequence, early differences in gene expression can make monozygotic twins more different than you would think.

There is a common misconception that identical twins have identical DNA and, though they begin development with a matching genetic blueprint, differences in gene expression throughout life means that they differentiate more and more as they age. Though still more similar than ordinary siblings, they are no longer as identical as one may believe. These differences mean that despite their virtually identical genotype, monozygotic (MZ) twins can still be phenotypically different.

With genetics often viewed as the be all and end all of what makes a person an individual, it can lead to questions such as why can variation occur in two people originating from the same genetic material; what can make identical twins different and when does this differentiation start? You could also ask; how different can two twins get? Do MZ twins have to be the same gender? Do identical twins have identical fingerprints? Genetics, as with all fields of science, can be complicated, and with thousands of genes interacting with personal environments, differences in development lead to each individual having their own distinct character, identity and look, even if that distinction is only slight.

Developing due to the split of one single fertilized egg, monozygotic twins start development as genetically identical and differences are often attributed to the effects of the environment, differences in life experiences and exposure to risk factors. However, this is not necessarily the case and monozygotic twins are born neither genetically nor phenotypically identical, beginning life with differences in gene expression.  Through mutations in the DNA sequence during early mitotic mistakes, twins are born with various differences in copy-number-variation and somatic mosaicism [1], two things that have been linked to disease and may be one explanation for discordance. However, these changes can be minimal and the monozygotic genotype remains virtually identical. The biggest source for variation comes from post–translational modifications to proteins and epigenetic modifications to DNA, which alter the phenotype by changing gene expression without affecting the genome at all.

Epigenetics is the study of changes in gene expression that occur without any changes in the DNA base sequence of the genome. Though monozygotic twins have essentially the same DNA, their epigenetic patterns differ, allowing for a difference in their gene expression and therefore, their phenotype. Epigenetic modifications can occur in one of three ways; histone modification, chromatin remodeling and DNA methylation. These modifications can occur both in utero and throughout life, often in response to environmental factors.

Though externally monozygotic twins look remarkably similar, they can be discordant for various phenotypes. The most commonly reported difference is the fingerprint, everyone has a distinct print and this is no different in monozygotic twins. However, these differences can be more serious with some discordance in development of complex disorders such as schizophrenia [2], congenital heart disease [3] and autoimmune diseases such as type-one diabetes, rheumatoid arthritis and multiple sclerosis [4].

How does the identical DNA of monozygotic twins differ in utero?

Differentiation of monozygotic twins starts before birth in the post-split embryo. In females one of the first epigenetic changes to occur is X-chromosome inactivation, also known as lyonization. One cell only needs the influence of a single X chromosome; a double dose of the X-linked genes has the potential to be toxic to the cell, in some cases leading to cancerous tissue. Therefore, in females one of their X chromosomes per cell has to be inactivated [5]. This process occurs when the embryo is made up of 700-1000 cells; each individual cell will randomly inactivate one of its X chromosomes. There is an equal probability for each chromosome being inactivated meaning that the ratio of active maternal vs paternal chromosomes will differ between the twins and cannot be predicted [6]. It is this pattern of inactivation that means often female monozygotic twins differ more than male twins with differences starting before birth.

Lyonization is a form of epigenetic modification; histone molecules bind to the chromosome and condense its structure, making it inaccessible to transcription factors and therefore silencing the expression of its genes. The effect of X-chromosome inactivation is often minimal in monozygotic twins, usually dependent on the size of the ratio between maternal and paternal chromosomes. If one twin’s inactivation pattern is skewed towards the maternal chromosome and the other twin’s skewed paternally, the differences will be more obvious than if the ratio in both is closer to a 50:50 split. Though a high frequency of skewed X-chromosome inactivation has been shown in twins, likely due to the reduced number of cells in the initial embryo following the original split, it is suggested that the skew is often the same in both with reciprocal skewing rarer [7]. However, this is a controversial conclusion and the frequency can often depend on the time of the X-chromosome inactivation relative to the time of the embryo splitting post fertilization [8]. 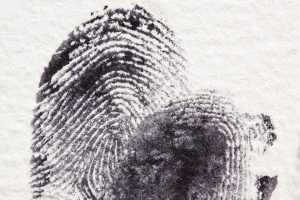 Famous for being unique, fingerprints are specific to the individual and this is no different in monozygotic twins. Developing in the womb, they are influenced greatly by the developmental environment, more so than due to one specific section of the genetic code therefore, no two person’s prints are the same, not even identical twins. Even the small difference in womb position between the two twins significantly alters the formation of the characteristic grooves and ridges.

There is a genetic element involved in determining the fingerprint pattern, however, this is complex and how such patterns are inherited is complicated and relies on multiple genes. Though each person has a unique formation, fingerprints generally take the form of one of three pattern categories; loop, arch or whorl. Genes that influence the skin, muscle, fat and blood vessels of the surrounding areas all contribute to the basic shape, size and spacing that occurs in the development of the prints, also known as dermatoglyphs. However, pressure on the skin during development, as well as differences in the fetal environment, alter this to a point where each person is different [9].

Do identical twins age the same?

Changes continue to occur after birth and due to various mistakes in replication and differences in epigenetic changes, monozygotic twins get more and more dissimilar as they age. Gene–environment interactions link the developmental factors of nature and nurture and result in epigenetic alterations to gene expression causing phenotypic changes that further differentiate the twins.

Monozygotic twins usually have a similar upbringing; therefore, have a common environment for the early years of development. Hence, it is later life experiences, in a non-shared environment, that is likely to have the greatest effect in differentiating the changing phenotype. Changes, known as the epigenetic drift, can be up to four–times greater in older monozygotic twin pairs compared to younger pairs. Many factors can result in epigenetic modifications and the exposure to different risk factors due to their different life experiences would be responsible for widening the differences in their gene expression [10]. Twins who are older, lead significantly different lifestyles, spend less time together or had more dissimilar health or medical histories showed an increased difference in their epigenetic patterns compared to those who were together more [11].

It cannot be denied that monozygotic twins are remarkably similar. However, the description of being ‘identical’ may need to be re-thought. With alterations both in utero and throughout life, the differences in gene expression make for a unique phenotype. Though closer than the usual 50% genetic similarity of siblings, they still have an individual genetic identity that may tell them apart, no matter how slight.

Did you enjoy this article? Why not check out some of our peer-reviewed journal content on CRISPR technology, such as DNA demethylation marks in chronic lymphocytic leukemia: it is time to let the cat out of the bag, over on our journal site.