NASA first sequenced DNA in space only 2 years ago. Could DNA sequencing be utilized to identify alien life? 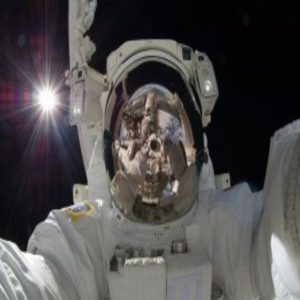 In 2016, NASA astronaut Kate Rubins became the first person to sequence DNA in space aboard the International Space Station (ISS) (1). This followed the first successful use of PCR in space to amplify DNA, which was conducted by astronaut Tim Peake (2).

The revelation was part of the Biomolecule Sequencer experiment and gives hope to enabling the diagnosis of illnesses or identifying microbes aboard the ISS, which could assist with maintaining the health of astronauts on long missions to Mars, for example.

Rubins made use of a commercially available DNA sequencing device that can fit in the palm of a hand, named MinION – developed by Oxford Nanopore Technologies (Oxford, UK). The device works by sending a positive current through nanopores that are embedded in membranes inside it. Simultaneously, a fluid containing a DNA sample passes through the device. Individual DNA molecules partially block the nanopores and change the current in a way that is unique to that particular sequence. 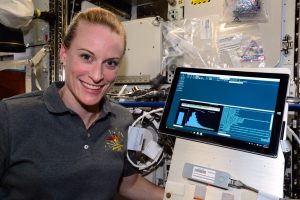 Kate Rubins stands next to the MinION DNA sequencer, aboard the ISS. Credit: NASA

Researchers can then identify the specific sequences by looking at these changes. Samples of mouse, virus and bacteria DNA were sent to the ISS as part of the experiment. Rubins performed the test aboard the ISS whilst researchers simultaneously sequenced identical samples on the ground.

The tests were set up so that the only variables that could account for differences in results were the spaceflight conditions, including microgravity. Precautions that were made include the preparation of samples on the ground and selection of organisms that had known DNA sequences.

There were many potential issues with using the device under microgravity, including the formation of air bubbles in the fluid, which on Earth rise to the top and can be removed. However, these bubbles do not behave as predictably in space.

“In space, if an air bubble is introduced, we don’t know how it will behave,” explained NASA planetary scientist Aaron Burton.

“Our biggest concern is that it could block the nanopores.”

However, the investigation was completed without fault. The device also overcame other points of concern; withstanding vibrations during launch and performing in microgravity just as well as it would on Earth.

NASA astronaut, Peggy Whitson, conducted the experiment as part of the Genes in Space-3 investigation, with the guidance of a team of NASA microbiologists, led by Sarah Wallace, who were observing from Ground Control in Houston (TX, USA).

Petri plates were touched to various surfaces in the ISS regularly to monitor microbes. Whitson transferred cells from these plates to test tubes, which was another first for the experiment as this has also never been done in space before.

She then isolated the DNA and prepared it for sequencing by amplification using the miniPCR thermal cycler. Whitson was then able to sequence the DNA using the MinION. The resulting data were sent to the team in Houston for analysis and identification.

“Right away we saw one microorganism pop up and then a second one, and they were things that we find all the time on the space station,” explained Wallace. “The validation of these results would be when we got the sample back to test on Earth.”

Sure enough, when the samples were received by the team on Earth, multiple repeats of the tests were performed and the findings of the Genes in Space-3 investigation were confirmed.

It is hoped this may lead to the possibility of the diagnosis and treatment of ill astronauts in space, as well as potentially enabling the identification of DNA-based alternative life forms in space. 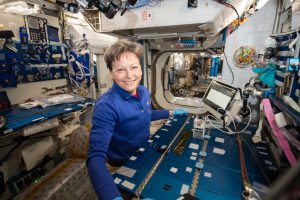 NASA astronaut, Peggy Whitson, stands next to the PCR and MinION, aboard the ISS.

From mysterious microbes to aliens

Whilst there may be potential for the miniPCR thermal cycler and MinION combination to be developed to be able to identify alien life, it cannot be guaranteed that any aliens would be DNA-based. There is thus a need for more methods to be developed that can identify and potentially enable a picture to be built up of alternative life forms.

“Most strategies for life detection rely upon finding features known to be associated with terran life, such as particular classes of molecules,” explained the researchers.

“But life may be vastly different on other planets and moons, particularly as we expand our efforts to explore ocean worlds like Europa and Enceladus.”

The study, published in Astrobiology, proposes a technique based on a cancer detection method called the “systematic evolution of ligands by exponential enrichment”. They suggest creating nucleic acids that can bind to molecules that are indicative of life, such as different organic molecules, minerals and even potentially metals.

These nucleic acids would act as a sensor and have the potential to be amplified. Their binding patterns could then be analyzed and biochemical fingerprint revealed. From this, it would be possible to deduce an idea of the complexity and molecular patterns of a life form.

“Without presupposing any particular molecular framework, this agnostic approach to life detection could be used from Mars to the far reaches of the Solar System, all within the framework of an instrument drawing little heat and power,” concluded the researchers.

This suggested method is much more mobile and less complicated than many other methods for detecting life, which includes mass spectrometers, as is the case on board the Mars rover, Curiosity (5).