Survival of the Non-Unfit, and the Possibly Fundamental Role of Environmental Epigenetics

A newly published paper pushes scientists to re-think adaptive Darwinian evolution. Will these ideas replace the theory with one in which environmentally-induced germ-line epigenetic changes lead to neutral evolution? 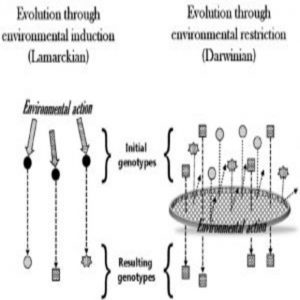 In Darwinian evolution, the environment is a filter. Mutations spontaneously and stochastically emerge, and environmental pressure allows only beneficial traits to survive and move into subsequent generations.

In an evolutionary theory outlined in a new thought paper, however, the environment plays a much different role—to a new end. According to Carlos Guerrero-Bosagna at Linkoping University in Sweden, inputs from the environment, such as food, temperature, and chemicals, trigger epigenetic modifications, which lead to genetic mutations. Guerrero-Bosagna says the mutations persist as long as they’re not detrimental. This is neutral evolution (sometimes called genetic drift), driven by environmental epigenetics.

These ideas have been proposed previously in various forms. But Guerrero-Bosagna says new data support them more conclusively than ever before, though it is all quite controversial: many, or most, evolutionary biologists disagree with neutral evolution as the primary component of evolution, never mind epigenetics causing it all.

Guerrero-Bosagna argues, however, that scientists need to take these ideas a lot more seriously when they conduct their research. “I think people have become more Darwinist than Darwin himself. Darwin knew about the limitations of his theory,” he said. “I want to open the mind to the possibility of neutral evolution and incorporate that as part of hypothesis-testing in experiments.”

Motoo Kimura first conceptualized neutral theory in 1968, concluding after a lifetime of work that most mutations are neutral, not adaptive. Using new genomics technologies, researchers have shown that in various bacteria, aquatic plants, the organelles of green algae, and other organisms, neutral evolution seems to be a driving force. “With the molecular tools that we have available now, we are confirming the prediction of Kimura, that actually the traits that are out there, the traits that prosper in evolution are not necessarily beneficial, not the traits that generate increased fitness, or increased function,” Guerrero-Bosagna said.

He says epigenetic modifications set the stage for such mutations. Research has shown that a cytosine (C) neighboring a guanine (G) is most likely to undergo methylation (and some regions of DNA are full of GC). Changing a C to a thymine (T)—a single nucleotide polymorphism mutation—requires two chemical steps, and the first one is DNA methylation. “It actually is 12–14 times more prone to mutate to T than if that C is not methylated,” said Guerrero-Bosagna. “You’ve already created the possibility of undergoing a point mutation.”

Studies have shown that mutations resulting from CpG methylation helped trigger the evolution of the BRCA1 gene, as well as transcription factor binding sites. Retrotransposition, which generates insertions and duplications, is also regulated epigenetically. Epigenetic modifications and patterns can be inherited for several generations, providing multiple chances for mutation.

While interesting, Guerrero-Bosagna’s ideas are not mainstream. Most researchers don’t believe new traits are mostly neutral or that epigenetic modifications drive mutations and evolution. “It’s hotly debated right now—what’s the role of epigenetics in evolution?” said Skinner. “Probably 9 out of 10 evolutionary biologists that you talk to will say it’s not important.”

Skinner guesses that this is because these biologists did not learn about epigenetics as students. “The young students coming up in the next generation probably will take a much more broad view mechanistically of how evolution is controlled,” he said. “This paper helps move it in that direction, and he [Guerrero-Bosagna] is one of the next generation.”

“This is not saying, oh, Darwin is completely wrong,” said Guerrero-Bosagna. “It’s just saying we should take what the contribution of Darwin was and put it into a modern world of molecular biology.” He equates this situation to one in physics. “Nobody thinks that Newton was completely wrong, but when Einstein came, what happened with Newton? His theory was limited in his scope. That’s what I’m saying. Darwin’s theory applies in a much more limited scope than previously thought.”

Source Guerrero-Bosagna, Carlos. “Evolution with No Reason: A Neutral View on Epigenetic Changes, Genomic Variability, and Evolutionary Novelty.” BioScience. May 2017, Vol. 67 No. 5, pg. 469-476