Western blotting has, despite the initial unclear potential and its limitations, matured into an essential biochemical technique.

This year marks the 40th anniversary of Western blotting [1]. Briefly, a Western blot is used to detect proteins of interest with antibodies, after the proteins have been separated based on size. Since Western blotting is one of the fundamental BioTechniques, I’m pretty confident that the Western blotting procedure is known to most readers. To a life scientist, Western blotting is probably as familiar as Post-it notes, Pac-Man and GPS are to the general public. Incidentally, all these things have a similar age and turn 40 in 2020.

The name Western blotting was coined by W. Neal Burnette in a single author paper [2]: “With due respect to Southern, the established tradition of ‘geographic’ naming of transfer techniques (‘Southern,’ ‘Northern’) is continued; the method described in this manuscript is referred to as ‘Western’ blotting.”

It was called Western (and not Eastern) since it originated from a lab located on the West Coast of the USA. Since Southern was a person (first name Edwin) and the Northern and Western blot are based on hypothetical persons, it is reasoned that the “Western” in Western blotting should be written with a capital.

There is another aspect of the work by W. Neal Burnette that I learned from a biography by Rajendrani Mukhopadhyay that is amazing. Burnette was an early adopter of preprints. When the original Western blot paper was rejected, Burnette started to share the paper with colleagues, which spread through the community as photocopies. Only a couple of years later, the manuscript was officially published in a peer-reviewed journal [2].

Love it or hate it

So, it has been 40 years and Western blotting has proven its tremendous value. I can appreciate the beauty of a Western blot with well-separated, crisp bands (and it must be said, the quality of the blot in the paper by Burnette is actually pretty impressive). I also understand the strengths of the method. But honestly, I dislike ‘doing’ a Western blot and it is by far my least favorite experimental method. This is largely due to the tedious procedure, consisting of a multitude of steps with failure lurking at every step. I am not alone and some of the frustration is shared on the twitter account @WB_Facts. To find out what others think about Western blotting, I posed a question on twitter. I got a mix of answers that covered the entire possible spectrum from pure joy to true hate.

Over the years there have been a number of improvements to make the procedure more robust and less painful. Precast gels are a good option when Western blotting is only occasionally performed. Detection of the signal by fluorescence improves quantification. But still, a Western blot is only as good as the antibody that is used [3]. Since antibodies are proteins isolated from biological samples, their quality will differ from batch to batch. Next to this, the selectivity of an antibody for a specific protein may be poor. Arguably, this can be verified by Western blotting itself [4]. 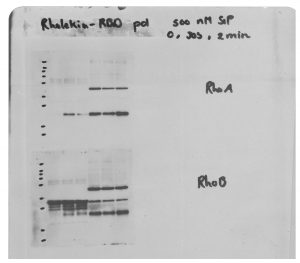 An example of the unprocessed end result of a Western blotting procedure. This experiment was performed by Nathalie Reinhard to detect the proteins RhoA and RhoB from cell lysates. Details can be found in ref [6].

Improbable as it may seem, it is also the 42nd anniversary of the radio debut of The Hitchhiker’s Guide to the Galaxy by Douglas Adams. I love to think of one of Adams’ quotes as a cautious note related to Western blots: “If you try and take a cat apart to see how it works, the first thing you have on your hands is a non-working cat.”

This quote reminds me of one of the troubling aspects of Western blotting. Cells are taken apart by lysis and their components are studied after separation on a gel. The lysis disrupts cell integrity and destroys cellular structures. It is difficult to reconcile this aspect of the method with research that is aimed at understanding processes in intact cells, e.g. cell migration, mitosis and signal transduction.

Another downside is that the heterogeneity between cells is lost, since Western blotting is performed on a large population of cells. Both the disruption and population analysis that are intrinsic to Western blotting add to my aversion for the method. This seems to be a good moment to disclose that my research mostly relies on fluorescence microscopy, which is ideally suited to study intact, single cells. I have been looking through the microscope for countless hours and I have marveled at the complexity, polarity and dynamics of cells and inside cells. Microscopy has transformed our view on the inner working of cells [5]. Obviously, I’m biased towards microscopy-based methods and it would be an oversimplification to state that one approach is superior to the other. In fact, Western blotting and imaging methods can nicely complement one another and we have used both when necessary [6].

Western blotting is not without its problems and limitations, but it has clearly proven to be one of the fundamental biochemical techniques in the life sciences. One of my favorite aspects of Western blotting is that it started out as a new technology without revealing its full potential. This is perfectly illustrated by the initial rejection of the manuscript that first reported Western blotting. Thus, Western blotting was very much like a hammer in search of a nail [7]. Over the last 40 years it has nailed many research questions and I expect it will continue to do so for at least another 40 years. 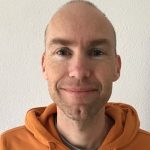 Joachim Goedhart is an assistant professor in the section of Molecular Cytology located at the University of Amsterdam (The Netherlands) and focuses on signaling mediated by a class of seven-transmembrane spanning receptors, the G-protein coupled receptor (GPCR) family. They employ genetically encoded fluorescent biosensors that enable quantitative, functional imaging of molecular interactions, protein activities or second messenger concentration in single living cells. You can follow his research updates on Twitter here.

The secret life of proteins