Researchers introduce a device that can continuously measure metabolism, monitor levels of almost any drug, metabolite, or biomarker in the body. 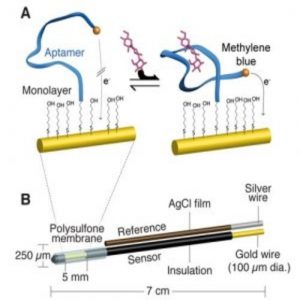 Diagram of the device.

To achieve the goals of personalized medicine, researchers will need to develop methods for delivering drugs at a time and dose specific to how each patient metabolizes them, which in turn will require a means of precisely and continuously measuring metabolites.

Technologies currently exist for monitoring glucose, lactate, and some neurotransmitters, but these detect only a single molecule as it reacts with a specific enzyme. Now, in the journal PNAS, Kevin Plaxco, Netz Arroyo, and their colleagues at the University of California, Santa Barbara report a device that can measure the levels of drugs, metabolites, and other small molecules in blood.

Plaxco’s group used electrochemical sensors (E-AB) coupled to aptamers that can detect a wide range of target molecules. “Our approach seems to be as general as the aptamers are, but you have to change them for each target,” noted Plaxco.

Upon binding its target, the apatamer undergoes a conformational change, which changes how a covalently-linked redox reporter transfers electrons to an underlying electrode. The sensor is protected from blood cells by a microporous polysulfone membrane similar to that used in hemodialysis, and it can fit through a 20-gauge needle.

The team implanted their device in jugular veins of anaesthetized rats and tracked real time pharmacokinetics for different antibiotics and chemotherapeutic agents with 3-second temporal resolution. This was sufficient to measure variability in drug metabolism in different rats as well as in the same rat over time. They also obtained precise real-time measurements in rats as they moved about their cages.

Although it could be some time before their device is approved for human use, Plaxco is optimistic. “All the individual components of our device are FDA approved, and it is smaller and lower current than a pacemaker,” he said.