Yes, the Epstein-Barr Virus is carcinogenic, but in an unexpected way. The genome is often represented in linear fashion on paper. But in the tangles of chromatin, genes thought to be distant from each other may actually interact quite closely. 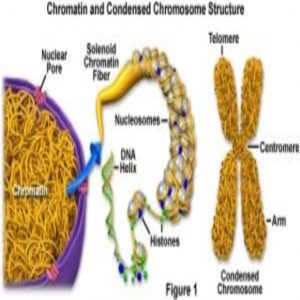 The Epstein-Barr Virus (EBV) is one of the most prevalent viruses in the developed world. It is highly infectious, spreading mostly via saliva, and nearly 90 percent of adults carry antibodies against it.

When EBV is active, it causes extreme fatigue, fever, aches and pains, and swollen lymph nodes. But the curious thing about this particular virus is that it often does not make people sick. Instead, it lays inactive and hidden inside B lymphocytes, the very cells the immune system would otherwise deploy to destroy it. It is here, within the B cell genomes, that EBV silently causes a more well-known illness: cancer.

Researchers have theorized that EBV activates the MYC gene, a promoter of cell growth. It also interacts with promoter and enhancer hubs for the tumor suppressor gene BCL2L11, also called BIM. As EBV activates MYC, it silences BIM, putting the pedal to the floor on cell growth while simultaneously cutting the brakes. Although these interactions are well-established, the precise mechanisms underlying them have eluded investigators until now.

“We know these genes are regulated,” said Michelle West, professor of tumor virology at the University of Sussex, England. But exactly how does the virus manipulate expression?

Many transcription factors control gene expression by binding DNA near their target genes; previous research had maintained a tight focus around the MYC and BIM genes for potential regulatory interactions. West and a team of researchers decided to cast a wider net, hypothesizing that the enhancer and promotor regions with which EBV interacted were in fact some distance away from MYC and BIM.

West and her team employed a technique called chromosome conformation capture, or 3C. On paper, we represent the genome as a linear double helix, said West, but in reality it’s all tangled up like a “bowl of tagliatelle.” The 3C method freezes genetic interactions as they happen so that researchers can ask, “Is this DNA near that DNA in 3-D space?”

“If you know the promoter and the enhancer,” said West, “you can use a restriction enzyme, and you’re left with the two genes held together by proteins. You stick it together with a ligase and you’ll create an artificial DNA junction. Then you can use PCR to find the unique gene product.” In this way, West and her team were able to investigate whether supposedly distant genes were actually close enough in three dimensions to interact.

Sure enough, the team observed that enhancers once thought distant to MYC were rather close together when caught in the tangle of chromatin. These upstream enhancers, which she said resided “miles away” from MYC, were able to activate the gene. Similarly, enhancer/promoter hubs at loci far from BIM acted to silence the gene when in close proximity, as determined by 3C.

West and her colleagues also employed 4C, a technique similar to 3C, but it does not require knowing both sides of a genetic interaction. Using 4C, “you can go fishing with a promoter or enhancer and identify what it’s interacting with,” she said.

Then, using ligases to create gene fragments and replicating these with PCR, West and team were able to investigate the effects of enhancers and promoters without identifying the target gene. Again, they found the reach of these genes was farther than previously predicted.

“The question is, could this actually have some significance when it comes to treatment?” said Ayman El-Guindi, a molecular virologist at Yale University familiar with West and her research.

He is certain that it does. El-Guindi pointed out that EZH2, an enzyme overexpressed in cancer cells, is a regulator of BIM. “If you can develop an inhibitor of EZH2 , then you have the opportunity of activating the expression of this gene,” said El-Guindi. In the case of EBV-related carcinogenesis, the reactivated BIM can resume its function to safeguard against cellular immortality and malignancy.

Implications of the study may reach beyond EBV-related cancers. “MYC is switched on in a lot of cancers,” said West. The way EBV instigates cancer even at a distance can give us a roadmap of how malignancies develop, she said, even when the virus isn’t involved at all.

Bearded dragons trim down the mystery of reptile sex-switching