Researchers found 32,755 research papers that reported on research with misidentified cell lines; however, they think this may still underestimate the extent of the problem. 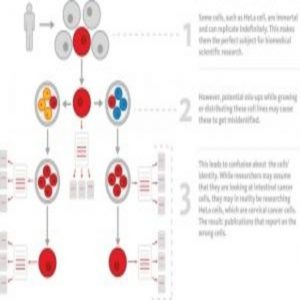 HeLa cells opened the flood gates for discussions about cell line contamination and experimental reproducibility both within the science community and in popular culture. Unfortunately, HeLa cells are not the only culprits for contamination and the contamination is not restricted to the laboratory. Misidentified cell lines litter the scientific literature; then, those studies get cited, spreading “contaminated” information beyond the original study. Now in PLOS One, researchers from Radboud University in Nijmegen, The Netherlands have reported on the impact of misidentified cell lines in biomedical literature. They discovered that it reaches further than the authors anticipated.

“There’s quite some effort in trying to avoid new and future [cell line] contaminations,” explained Serge Horbach, first author of the study. “But there seems to be very little attention for all the research articles that are already out there that people are still building their new research on.”

To look into this problem, Horbach began with a list of 451 misidentified cell lines from the International Cell Line Authentication Committee (ICLAC). He classified papers describing research using these cell lines as primary papers, and papers citing that research as secondary papers.

Horbach then searched for papers reporting the first establishment of different cell lines on the online cell line database, Cellosaurus, and confirmed the data using three additional cell line databases. He next combed through literature listed in the Web of Science database for papers referencing the “establishing” articles. In parallel, he also used the Web of Science database to search for the misidentified cell lines’ names in paper titles, abstracts, and keywords.

With these combined approaches, Horbach found 32,755 research articles that relied on misidentified cell lines. Approximately 90% of these papers were also cited at least once in other papers, further propagating the initial inaccuracies.

These numbers came after Horbach verified the establishing articles and excluded cell lines with names that are not unique identifiers from the overall analysis. Because of this dataset trimming, Horbach suspects that these numbers are actually conservative estimates; he suspects that more than 500,000 papers rely on misindentifed cell lines.

“It is not unexpected, but it is eye opening how much contamination of cell lines leads to contamination of the scientific literature,” stated Fernando Pardo-Manuel de Villena from the University of North Carolina, Chapel Hill (USA) who was not involved in this research.

It is important to note that using misidentified cell lines does not necessarily nullify a study. For some projects, the actual cell line is of little importance as researchers are studying general characteristics of cells. That, however, does not reduce the problem of the scientific literature contamination.

“The fact that we don’t address this as a community is really, really worrisome,” noted de Villena. “I think scientists praise themselves about being objective and try to do things carefully. This is not the state of the art of standard practiced procedures that we should be applying. We should do much better.”

Cell line misidentification infiltrated research over years and affected countless studies; these cannot be removed from the literature, making it hard to address the problem. In addition to annotating already published papers, Horbach therefore advocates for transparency for cell culture-based studies instead. First, researchers should be aware if their cells are misidentified, and disclose “an expression of concern” in future research papers. Second, to facilitate future studies like Horbach’s current study, scientific research papers should clearly include information about cell lines in a searchable portion of the paper (title, abstract, keywords).

“Primarily, we’d like to work together more in depth with the people in the field – so biomedical scientists and cell biologists – just to trace this problem in more detail and then also to consider how much [scientific] conclusions, or to what extent conclusions, have been affected by the use of misidentified cells,” Horbach concluded.

Quality control: the dark side of cell culture