Novel techniques could provide the answers to how tissues and organs in embryos are constructed and how embryo is formed. 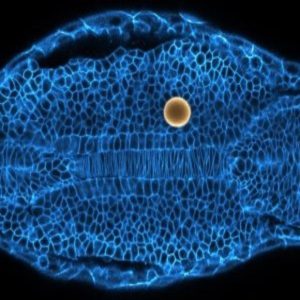 Embryonic tissue of a zebrafish showing the cell membranes in blue and a magnetic droplet, used to probe the tissue mechanics, in yellow. Credit: Alessandro Mongera.

Researchers from the University of California, Santa Barbara (CA, USA) have developed novel techniques that have enabled them to visualize how tissues and organs in embryos are constructed. The techniques could provide researchers with the answers to other important human health questions, including how cancers form and spread.

“In a nutshell, we discovered a fundamental physical mechanism that cells use to mold embryonic tissues into their functional 3D shapes,” commented Otger Campàs, group leader and professor of mechanical engineering at the University of California, Santa Barbara.

The study, published in Nature, reveals that groups of cells move together between liquid and solid states in order to build up a vertebrate embryo. It has been compared to the way glass is molded, with the cells ‘melting’ into a fluid shape that can be restructured.

“The transition from fluid to solid tissue states that we observed is known in physics as ‘jamming’,” explained Campàs. “Jamming transitions are a very general phenomena that happens when particles in disordered systems, such as foams, emulsions or glasses, are forced together or cooled down.”

The novel techniques utilized in order to uncover this process involve measuring the forces between cells inside embryos, as well as exerting small forces on the cells as they build tissues. The team used zebrafish embryos, placing droplets of ferromagnetic fluid between the cells of the growing tissue. These allowed them to visualize the forces that cells apply on each other by seeing how the droplet was deformed.

As the droplets were magnetic, the team could also manipulate them to exert force on other cells to see how the tissue would be affected. This kind of study had been previously limited, due to the incapability of inserting probes between cells in embryos to measure forces.

Their work confirms a hypothesis made by mathematician D’Arcy Thompson 100 years ago. “He was convinced that some of the physical mechanisms that give shapes to inert materials were also at play to shape living organisms. Remarkably, he compared groups of cells to foams and even the shaping of cells and tissues to glassblowing,” said Campàs.

The team now hopes to apply this research to studying the mechanisms of cancer spread and growth. They believe their techniques have the potential to elucidate novel targets for drug discovery.

The ancient canine cancer that has spread worldwide

It takes two: immunotherapy and cancer dance an intricate tango