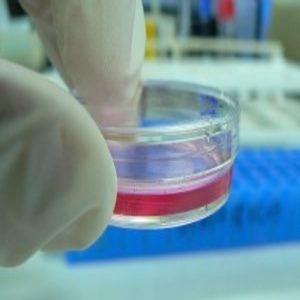 Understanding the underlying mechanisms of stem cell differentiation will ultimately lead to more effective uses of stem cells in biomedical research and a greater ability to develop therapeutic uses. MicroRNAs play a key role in differentiation; in fact, stem cells that cannot produce them cannot differentiate. But until now, stem cell biologists have been scratching their heads about exactly why they are required. A recent Stem Cell Reports article now reveals that microRNA-deficient mouse ESCs fail to differentiate, partially due to a lack of a certain miRNA and its influence on p53.

In wild-type cells, Dgcr8 processes miRNAs and prepares them for cleavage by another protein, DICER, to make mature miRNAs. Since Dgcr8-null cells cannot correctly handle miRNAs, Zhao and Kim designed several mimic miRNAs that bypass Dgcr8, but can still be processed downstream by DICER. Using lentivirus to introduce the mimic miRNAs into the ESCs lacking Dgcr8 guaranteed stable expression, which the researchers needed since stem cell differentiation can take days or even weeks.

Of the candidate mimic miRNAs tested, Zhao and Kim focused on miR-302. It improved ESC differentiation into neuronal cell lineages but did not restore the potential for differentiation to endoderm or mesodermal lineages, which indicated that other lineages may need other miRNAs.

Zhao was not surprised by this result. “In mice, there are more than one thousand mature miRNAs,” he explained. “The rest of the miRNAs must do something during differentiation.”

To find out how miR-302 facilitates neuronal differentiation, the researchers looked at global gene expression patterns in cells lacking Dgcr8 using microarray technology. They saw that reintroducing miR-302 into these cells suppressed genes regulated by p53-dependent pathways such as apoptosis. Inactivating p53 in the Dgcr8 mutant stem cells and isolating induced pluripotent stem cells (iPSCs) lacking both Dgcr8 and p53 improved neuronal differentiation, with effects similar to what the researchers saw when they reintroduced miR-302 alone. These experiments suggested that miR-302 normally blocks p53 during neuronal differentiation. Further experiments confirmed a direct interaction between miR-302 and p53 gene expression.

“p53 is best known for its function as a tumor suppressor, but in this case, it actually serves as a differentiation barrier,” said Zhao. “It could serve as probably some kind of surveillance mechanism to detect genetic mutations early in embryo development.”

Discovering a role for one specific miRNA, in this case miR-302, in ESC differentiation and the cellular mechanism it regulates opens a world of research opportunities for future studies. Moving forward, Zhao and Kim plan to use their mimic-miRNA method to evaluate other miRNAs.

Decoding the secrets of totipotent cells

2 MAY 2019 BIOENGINEERING AND BIOPHYSICS