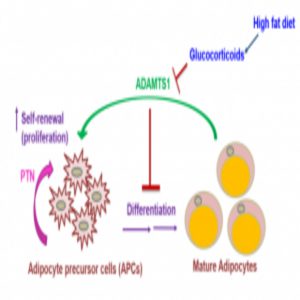 Proposed signaling mechanism that controls how preadipocytes decide whether to turn into fat cells or self-renew.

A fat stem cell needs to make an important decision: does it mature into a fat cell or divide? Although controlling our fat cells might be wishful thinking, uncovering how cells make this decision holds the key to understanding obesity.

Undifferentiated adipocytes form fat pads in response to several factors, including genetics, diet, physical activity, and even medications such as glucocorticoids—steroids frequently used to treat patients with autoimmune diseases or cancer that can also cause weight gain. Now, researchers have uncovered the mechanism fat cells use to decide whether to differentiate in response to glucocorticoids and diet.

“If we are able to manipulate how stem cells differentiate or self-renew, we might be able to control, say, fat formation. We might be able to find a cure for obesity,” said Janica Wong from Stanford University, lead author of the study published in Science Signaling (1).

The researchers next made a transgenic mouse overexpressing Adamts1 in fat tissue to study how ADAMTS1—an extracellular protein that potentially responds to environmental changes—influences fat formation. “Our mouse model consistently shows a very strong phenotype,” said Wong, “They have less adipose tissue and more muscles, like Superman. Because of this observation, we were pretty confident that Adamts1 was doing something to the fat.” However, the researchers weren’t sure what.

Flow cytometry and light microscopy experiments revealed that preadipocytes differentiate into fat in the absence of ADAMTS1 and proliferate in its presence. From there, by using another microarray and monitoring adipocyte activity, Wong and her team found that Adamts1 induces production of pleiotrophin (PTN)—a protein that regulates stem cell self-renewal by activating the well-established adipogenesis-inhibiting Wnt/β-catenin signaling pathway.

Notably, cells stopped proliferating and started to differentiate when exposed to an antibody against PTN. “That’s very exciting,” said Wong, “We were able to manipulate the pathway, which by a single antibody is something very significant.”

Although medications such as glucocorticoids contribute to obesity, high-calorie diets are the biggest offenders. Interestingly, a high-fat diet (HFD) induced adipocyte differentiation in mice by increasing glucocorticoids, thereby blocking the ADAMTS1 signaling mechanism similar to when adipocytes were stimulated with glucocorticoids only. Furthermore, the same ADAMTS1-PTN-Wnt signaling pathway appeared in both cultured human fat cells and fat tissue samples from female volunteers who ate a HFD for 4 weeks.

“What we want to do is maybe get more patient samples,” said Wong, “and see if [we’re] able to find something clinically relevant.” This is a lofty goal, however, that Wong expects may take a decade.

Although a potential therapy targeting this pathway may seem distant, these results contribute to a fundamental fat biology question, according to Philipp Scherer of the University of Texas Southwestern, who was not associated with this study, “How can we manipulate fat pads in a fat pad–specific way? Learning how to recruit more fat cells as opposed to making the existing ones bigger is certainly an integral part of these fat pad–specific manipulations that we still have to learn much more about,” he said.

How smells contribute to obesity

Growing tissues without the issues