Sometimes it’s all too easy to reach for that slice of pie. Researchers map the neural pathways that influence our decision making when it comes to choosing dinner. 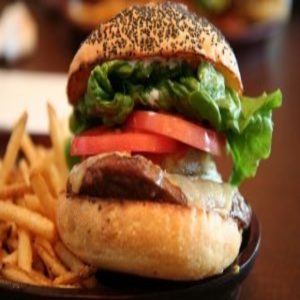 Your insular cortex and AgRP neurons may influence whether you give into temptation and eat that hamburger.

Whether it is burger billboard advertising or television commercials promoting poutine, pictures projecting delicious food can cause even the most strong-minded individuals to give into temptation and reach for their favorite dish. But how do these visual cues trigger food cravings and influence our behavior? New research published in Nature describes how neurons that trigger hunger influence a distant set of neurons associated with the decision to react–or not–to food-related cues.

“If you’re hungry, an image of food can look delectable and influence your behavior when deciding whether to eat it or not,” said lead study author Yoav Livneh from Harvard Medical School. “Conversely, if you are full after demolishing a huge meal, the same picture will be more unappealing”

To investigate this connection, Livneh and his team turned to the insular cortex brain area in mouse models since previous human neuroimaging studies suggested its involvement in food-related decision making. The hard-to-reach location of the insular cortex made accessing this area difficult, so they used a reflective microprism and expressed a fluorescent calcium sensor delivered by virus to monitor the neural activity within the insular cortex.

Having confirmed the role of the insular cortex, the team next wanted to determine how hunger modulated the food cue-induced responses in the insular cortex. “Previous research has confirmed that Agouti-related protein (AgRP) neurons can restore feeding behaviors, so we wanted to try and link the two areas together,” said Livneh.

While this study was conducted in a mouse model, Livneh and his team are confident that the findings will translate to human studies. “AgRP neurons are conserved across all mammals, with all the previous literature we based our research questions on being predominantly using human test subjects,” Livneh stated.

They also believe their findings have clinical relevance. “Being able to control this pathway could help individuals with disorders such as anorexia nervosa and obesity, who we suspect may have disregulated pathways. Our future work involves looking into this pathway in greater detail so we can take the relevant steps forward.”

Is your liver as old as your brain?