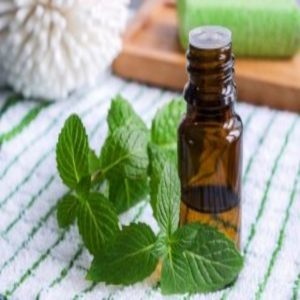 Essential oils have been touted as a remedy for everything from acne to cancer, usually without scientific evidence to support the claims. Now, a group of scientists led by Martin Fussenegger at ETH Zurich, Basel, Switzerland have put these oils to medical use by engineering a special cell line designed to respond to spearmint odor by releasing a spider toxin that combats chronic pain.

“In principle, we are cell engineers,” said Fussenegger, “We engineer cells in a way to reach therapeutic goals.”

Chronic pain affects over a billion people worldwide, carrying a global burden that is greater than heart disease, cancer, and diabetes combined. Available treatments consist of painkillers like ibuprofen or aspirin, which have limited effectivity, or opioids like morphine that are effective, but invite tolerance, dependence, and addiction. “As engineers, we think that’s a problem we need to solve,” said Fussenegger.

The researchers began by modifying a human embryonic cell line to produce Huwentoxin-IV, a peptide isolated from the venom of a tarantula called the Chinese bird spider, which is known to have pain-killing properties. On its own, this peptide has a very short half-life in the bloodstream, so simply injecting it is not an effective pain management strategy. To counter this problem, Fussenegger and colleagues came up with a cell-based strategy to produce a modified form of this peptide on demand within the body.

After assuring that this modified peptide had effective pain-relief properties both in vitro and in vivo, the researchers turned to finding a way to precisely control the release of the peptide. They designed an elegant strategy by engineering cells to express an olfactory receptor sensitive to R-carvone, a molecule present in spearmint odor, and coupled the signaling pathway downstream of this receptor to the expression of the spider toxin-derived peptide. They then implanted this modified, stably expressing cell line, dubbed AromaCell, into mouse models of pain.

Upon exposure to spearmint aroma spread through a diffuser, the mice implanted with the AromaCells displayed stable and long-lasting pain relief. Interestingly, ingesting spearmint chewing gum extract was also sufficient to induce the expression of the spider-toxin in mice implanted with the designer cells. Additionally, the mice showed no ill-effects or signs of addiction and the pain relief lasted for several days after initial exposure.

Fussenegger and colleagues now hope to find investors interested in developing this strategy further in a clinical setting. “We not only have a very convenient pain management strategy,” said Fussenegger, “But this pain management works over several days with a single spearmint dose, and it does not elicit any tremor, any epileptic like behavior, nor any addiction.”