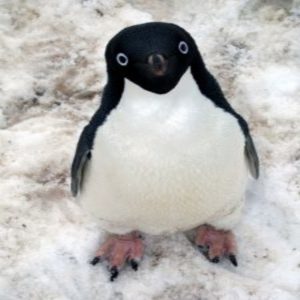 Winter is coming. This means that migratory marine creatures will soon leave their cozy breeding places to head out to the oceans. Conservationists monitor their migration patterns in the wild using GPS tagging, but this requires invasive, expensive devices with a limited battery life. Now, a group led by Michael Polito from Louisiana State University has developed an alternative tracking method using penguin tail feathers, which they reported in Biology Letters.

“This study does a really nice job of integrating two complementary but very different movement ecology toolsets: the direct satellite tagging and the compound specific stable isotope analysis,” said Kelton McMahon from the University of Rhode Island, who was not involved in this study.

Stable isotope analysis is based on the notion that animals are what and where they eat. “The isotopic signature in an animal’s food and its environment is imprinted upon its tissues when it grows in that environment and is eating that food,” explained Polito. But it is challenging to determine whether the differences in tissue composition arise from traveling to different locations or from consuming different foods in the same location.

To tease apart the influence of diet and location, Polito and his colleagues used a modified approach: compound-specific stable isotope analysis. Instead of analyzing the bulk carbon and nitrogen contents, they characterized the essential amino acids in the tail feathers, which grow continuously during winter, of Chinstrap and Adélie penguins. Because penguins cannot produce essential amino acids, they obtain them from phytoplankton, the lowest organisms in their food chain. Since amino acids patterns in phytoplankton differ across the ocean basin, the patterns in tail feathers of penguins feeding in different locations also differ.

The team tested their method in the wild by sampling tail feathers of GPS-tagged penguins that had returned after winter migration, finding that the essential amino acid profiles differed between penguins that migrated east and those that migrated west. By applying their model to untagged penguins, the researchers predicted the migration patterns of a majority of the penguins with more than an 80% degree of certainty.

The resolution of this tracking method is coarser than direct tracking, as detailed phytoplankton profiling across the ocean floor has not yet been done. “It’s true that this type of technique will never give us the fine scale, hourly or minute, resolution like an external satellite tag,” said McMahon; however, he added that the isotopic method compensates by providing long-term integrated information in a non-invasive manner.

“The really exciting thing about this isotopic approach is that now we have found another way to get information about where animals go during winter time, and it doesn’t even require tracking,” said Polito. He envisions use of this method in the future for tracking and conservation of other migrating animals, such as sea turtles, whales, and seals.

The miracle of the Maillard reaction