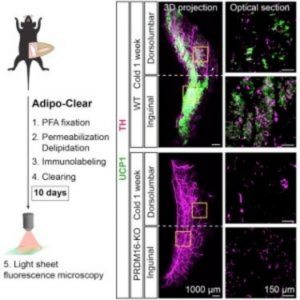 Humans have three types of fat cells, white, beige and brown, that work in concert to maintain energy storage and usage. While the negative effects of white fat accumulation have long been studied, it remains unclear how beige and brown fat interact within their environment to modulate energy use. Traditional histological studies only provide a superficial glimpse into a fat cell’s environment, yielding a rudimentary understanding of how these cells function.

“I thought that without looking at the tissue in its totality, we were probably missing important biology,” said Paul Cohen, professor at Rockefeller University and senior author. However, fat presents a unique set of challenges for standard imaging techniques as the high lipid content causes light scattering, thus limiting the researcher’s view of the tissue and its architecture.

Using this technique, the team found differences in the architecture of subcutaneous and visceral fat, organized into discrete lobules or amorphous localization, respectively. “We are excited by that, not because we want to divide a tissue into ever smaller categories or landmarks, but because people still don’t really know or agree on what the developmental origin is of beige adipocytes,” said Cohen. The observed variation in tissue organization may ultimately be used as a tool to better understand the developmental origins of these cells.

In addition to adipocytes, adipose tissue is also home to neuronal processes and innervations from the sympathetic nervous system that are critical for thermogenesis. “I think most excitingly, is we saw this clear relationship between the sympathetic projections in beige adipocytes and we wondered what was mediating that relationship,” said Cohen.

During his postdoctoral studies, Cohen developed a mouse model with an adipocyte-specific knockout of the transcription coregulator PRDM-16. PRDM-16 knockout mice are unable to activate beige fat when exposed to thermal stressors and are prone to metabolic diseases. Using this same mouse line, the researchers found that the density of sympathetic projections in subcutaneous fat is dependent on PRDM-16 expression.

These findings suggest a regulated communication between fat cells and neurons that is governed by PRDM-16. However, the complete molecular signaling sequelae remains unknown. “If we could selectively activate sympathetic signals to fat, it might be a really attractive way to turn on these thermogenic cells,” said Cohen.