Researchers have identified the genes involved in the sea cucumber’s gory ritual of expelling and regenerating its gut. Will it become the next important animal model for studies into regenerative medicine? 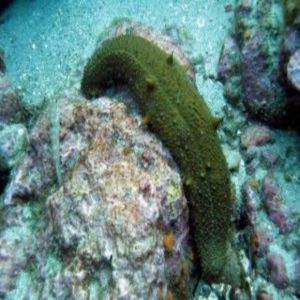 Animals often evolve fascinating powers to defend themselves from pathogens, pollution, or predators. Take the case of sea cucumbers: they scare off their predators by literally spilling their guts, which regenerate within a few weeks. Although scientists have known about this evasive stunt for a long time, the genetic elements that enable such a feat remained a mystery. Now, a recent study published in PLoS Biology reports the sea cucumber genome sequence and pinpoints the genes involved in gut regeneration.

“This is a very nice example of what can be done with genetic analyses,” said Leroy Hood from the Institute for Systems Biology in Seattle, who was not involved with the study. “I think this will indeed be a very valuable resource.”

Sea cucumbers belong to the phylum Echinodermata, but their structure and function differ from other echinoderms. For instance, sea cucumbers are soft and cylindrical, while echinoderms such as sea stars and sea urchins have calcified exoskeletons and five-sided symmetry. The visceral regeneration defense mechanism is also unique to sea cucumbers.

Curious about these differences, Annie Mercier from Memorial University in Canada, who led this study, embarked upon sequencing the sea cucumber genome. “It’s been a long winding initiative,” she said. “This one is truly the first very complete and high-quality genome with which you can actually gather information in the future.”

Mercier and colleagues knew from other studies that tandem gene repeats primarily drive genome evolution. They suspected that such gene repeats were responsible for the unique visceral regeneration abilities of sea cucumbers, so they looked for clusters of tandem-duplicated genes in the sea cucumber genome.

They next evaluated gene expression from these clusters during visceral regeneration. To achieve this, the team chemically induced sea cucumbers to expel their guts. Over the next 21 days, they periodically isolated RNA from the regenerating gut tissues. Sure enough, they saw a dramatic 10,000-fold up-regulated expression of genes from one cluster during the early stages of gut regeneration, indicating that they play a role in this process.

The team believes that their findings will propel the sea cucumber to become a model organism for studying regenerative medicine in the future. In addition, they hope that their results will better inform selective breeding in sea cucumber aquaculture and enable their sustainable production.

In the future, Mercier plans to sequence genomes from other echinoderms, since they occupy an important position in the evolutionary tree at the branch diverging from chordates, potentially offering more advanced evolutionary understanding.

A record-breaking genome and the conquering of land