Researchers discovered a methylation mark previously unidentified in the mammalian genome. What have they learned about it? 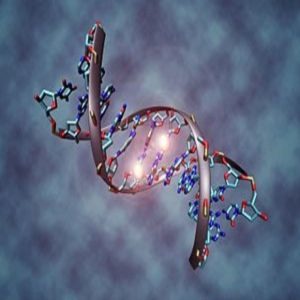 Although still in its infancy, the field of epigenetics already has established dogmas. With respect to the mammalian genome, a central tenet states that DNA methylation occurs exclusively on the fifth position of cytosine (5mC). While there is evidence of other methylation modifications, namely N6-methyladenine (N6-mA), in bacteria and some flies and worms, for years there was little evidence of their existence in the mammalian genome. Then last year, Andrew Xiao and his colleagues at Yale University published a groundbreaking study in the journal Nature showing that DNA methylation does in fact occur on N6 of adenines in mammalian embryonic stem cells (ESCs) (1).

During early embryonic development, epigenetic processes incorporate histone protein variants into the total histone pool. For example, the level of H2A.X, an H2A variant, is dramatically upregulated in early embryos. DNA winds around histones, which play an important role in gene regulation during development. So, what exactly are the histone variants doing?

ChIP-ing Away at the Genome

Using conventional methods to find modifications other than 5mC is like searching for a needle in a haystack, so Xiao and colleagues combined two established techniques to interrogate a genomic region of interest. First, the researchers performed chromatin immunoprecipitation (ChIP) on mouse ESCs to isolate the histone variant H2A.X, which plays a role in cell fate in mammals. Then, the researchers used single-molecule real-time (SMRT) sequencing to identify DNA modifications occurring in H2A.X-associated regions. This novel technique showed that N6-mA was enriched in H2A.X-associated regions, confirming the presence of this DNA modification in mammalian cells for the first time.

The team next set out to identify the demethylase involved in N6-mA regulation. For this, they turned to Alkbh, a family of genes coding for demethylases that efficiently remove methyl groups in the mammalian genome. More specifically, they focused on Alkbh1, since previous studies showed that Alkbh1-deficient mice have smaller litters due to embryonic lethality, suggesting a critical role for the gene in early development.

The researchers developed Alkbh1-knockout ESCs and compared them to wild-type cells. Alkbh1-knockout cells showed significantly increased levels of N6-mA, suggesting that in normal conditions, ALKBH1 demethylase reduces the number of N6-mA modifications by removing methyl groups. But why does N6-mA need to be kept in check during development?

To test the function of N6-mA, the researchers sequenced the transcriptomes of their Alkbh1-knockout ESCs. They found more than 500 genes that were down-regulated in Alkbh1-knockout cells compared to wild type cells, indicating that increasing N6-mA suppresses transcription in early development. Most strikingly, N6-mA in Alkbh1-knockout cells was specifically enriched at a particular type of endogenous retrotransposon, LINE-1, which can still remobilize in mammalian genomes. This N6-mA enrichment serves as an epigenetic silencing center that suppresses the expression of nearby genes.

These findings came as a surprise given the known role of N6-mA as a gene activator in other species. “The discovery of this new modification basically told us that there are untold stories in early embryonic development that need to be explored,” said Xiao.

These findings challenged conventional wisdom about DNA methylation in the mammalian genome and raised a number of new questions. For example, what is the purpose of the N6-mA modification in mammals? Other species have relatively low levels of 5mC, so they might need N6-mA to lend a helping hand. Why does this modification occur so infrequently in the mammalian genome? And if it is important, why don’t cells use it more often?

“Sometimes being rare has an advantage,” said Xiao while reflecting on his last 15 years in the field. Histone variants make up only a small portion of the histone population, but they equip chromatin with unique properties, and their levels are likely to be dynamically regulated throughout development.

Expanding on this idea, Xiao’s team is now working to better understand whether there are critical developmental points or pathological conditions that alter levels of N6-mA. “Then the question becomes what is the function of N6-mA in those conditions?” said Xiao.

In a recent paper in Nature Communications, Peng Jin and colleagues at Emory University provided additional support for a role of N6-mA in mammalian cells (2). The authors found that N6-mA levels were greatly upregulated in mouse frontal cortex after exposure to restraint stress. As in mouse ESCs, N6-mA is targeted to young LINE-1s, thereby silencing their expression together with that of nearby genes.

“This is a very young field, and I think most of the researchers, including myself, do not fully understand the biology of N6-mA. So at this moment, we have to keep an open mind and be very careful about what we do and what conclusions we can draw from our experiments,” Xiao cautioned. Many of these experiments are performed in cell culture environments; thus, for further studies of N6-mA, cell conditions need to be standardized and monitored meticulously because variations in environmental exposures can change modifications, ultimately differentiating the cells and possibly occluding expression of modifications of interest.

Forget-me-not: scientists uncover how epigenetic memories are lost in plants

Can the key to the perfect diet be found in our DNA?