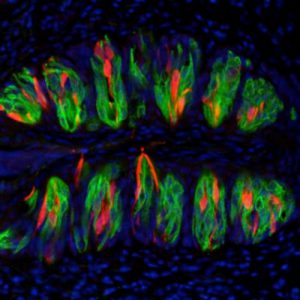 We taste sour food. We also maintain our balance. These functions seem unrelated, yet surprisingly, they have something in common: a new molecular ion channel called Otopetrin 1 (Otop1), which scientists recently reported in the journal Science.

Senior author, Emily Liman, and her team at the University of Southern California began with the goal of understanding the role of proton channels in sour taste. “Sour [taste mechanisms] have really remained elusive,” explained Steven Munger from the University of Florida, who was not involved in this study. “Sour taste is particularly weird in that it is ionic. Protons are considered to be the principle stimulus.”

Liman’s team performed a transcriptome analysis to identify candidate genes for proton ion channels that might be involved in sensing sour tastes. The group compared mouse taste receptor cells that detect sour tastes and are positive for a zinc-sensitive proton current (PKD2L1 cells) to taste cells that detect other tastes and did not produce this current (TRPM5 cells). This analysis produced a list of genes enriched in the PKD2L1 cells.

The scientists further refined their list to 41 candidates by focusing on uncharacterized transmembrane proteins. To understand which of these may be the proton channel of interest, they expressed each gene in human HEK-293 cells and Xenopus oocytes. They then induced an ionic current response by exposing the cells to a low extracellular pH. In these experiments, Otop1 was the only expressed gene for which the cells showed a large inward current response.

Otop1 is important for the development of the vestibular system and balance in mice, but it had never been associated with taste or ion channel mechanisms. “Fortunately, my graduate student [Yu-Hsiang Tu] had perseverance and was not too concerned that this gene had a known function and went ahead and tested it anyways,” recalled Liman. “We were quite shocked that it indeed coded for a proton channel and the effect was not subtle!”

The scientists confirmed an influx of protons into the cell using a membrane-permeant pH indicator to visualize the process, and then they assessed the specificity of the Otop1 channel for protons. They did this by measuring the the voltage at which the inward and outward movement of ions is exactly balanced and observed that it followed the pattern for a H+-selective ion channel.

Finally, the scientists stained mouse tongue tissues to confirm the presence of Otop1 and used an Otop1 mutant mouse previously shown to have a vestibular defect to assess proton currents in taste cells. They detected a decrease in the current levels in the mutants compared to those in wild-type mice.

Otop1 is part of the Otopetrin family of genes, which also includes Otop2 and Otop3. This gene family is expressed in a variety of species from humans to mice to Drosophila and C..elegans. “This is surprising that a gene involved in mammalian taste is conserved in invertebrates. It will be interesting to know if it has similar functions in both,” said Liman.

Liman and Munger are both excited to see what will come from these initial findings. Liman imagines that scientists will delve into trying to understand the channel’s biophysics, its structure, and its biological function in taste, balance, and other systems.

Munger can see how better understanding these proton channels may help researchers identify and assess subpopulations of cells. Scientists could then perturb cellular functions, map connections, and really begin to dissect how these cells respond to different taste stimuli. “Basic sciences take us in a huge number of directions,” said Munger.