What Flies Can Teach Us about Obesity - BioTechniques

A new fruit fly model offers endless opportunities for easily manipulating dietary, genetic, and environmental influences to tease out the complex interactions that lead to obesity. 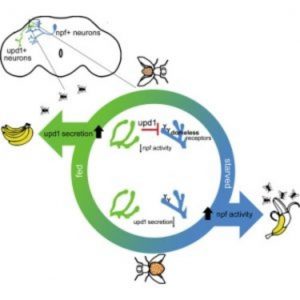 Why is it that some can feel their waists expanding just by tasting a slice of chocolate cake, while others wolf down everything in front of them and never seem to change in size? The interaction between diet, environment, and genetics is extremely complex, and understanding it is key for researchers to develop appropriate preventative and therapeutic measures for obesity.

The ability to alter individual elements one by one to tease out how each contributes to obesity would go a long way towards understanding the disease. Now, researchers at Cold Spring Harbor Laboratory have uncovered a neural pathway in flies that is surprisingly similar to the one that signals satiety in humans, allowing them to develop a new Drosophila model for studying obesity.

Scientists have known for decades that the hormone leptin travels from fat cells to convey the message that a mammal is full and should stop eating. In the new study, first author Jennifer Beshel and her colleagues focused on unpaired 1 (upd1), the fly homolog of leptin.

“We performed genetic manipulations in which we removed upd1 specifically from the fly brain,” said Beshel in a press release. “What we got was overweight flies—flies that couldn’t stop eating. They were missing the satiety signal, and this signal was originating from the neurons themselves, not from fat tissue. We could reverse this in fly neurons by adding the genetic sequence that codes for the production of human leptin.”

The researchers deleted other fly homologs of the mammalian leptin pathway, including the upd1 receptor, along with the subset of neurons upd1 targets to convey satiety and testing their functions along the way. The team discovered that this fly pathway mirrors the functions of the leptin pathway in humans, and mutations in these genes caused flies to gain much more weight when food high in fat and sugar was readily available to them.

“Now that we’ve established this fly model, we can look forward to performing thousands of genetic manipulations on this neural circuit to see what might regulate the release of the leptin analog, upd1,” Beshel said. “Our goal with the fly system is to quickly screen through thousands of different candidates for things that might, for example, confer resiliency in the presence of high-fat food.”