Two years ago, researchers accidentally gave scarab beetles an extra eye-like structure by downregulating a single gene. Now they discovered that it doesn’t just look like an eye – it functions like one too. 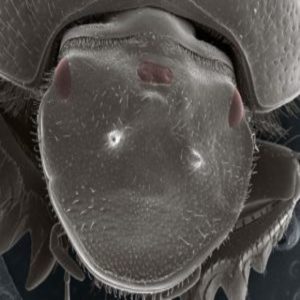 The eye is a highly complex organ, yet like the rest of the body it was once little more than a clump of basic tissue. For an eye to emerge, hundreds of genes had to be expressed at the right time and place in development. This would seem to leave a lot of room for error, yet a new study, published in Proceedings of the National Academy of Sciences, suggests that the developmental system is able to adapt to even major changes in gene expression. By disrupting a key gene for head development in scarab beetles, researchers found that beetles developed a functioning third eye in the middle of their heads.

Lead author Eduardo Zattara from Indiana University (IN, USA) first created three-eyed beetles completely by accident. “We weren’t looking for it, we’re not an eye lab,” commented Zattara. In fact, the group had been trying to understand how genes determine where beetles grow horns. They wondered whether a gene called orthodenticle, or otd, which is involved in head development when beetles are embryos, could also play a role in the production of horns once the beetles are larvae. To find out, they turned off this gene in larvae, and established that horns either appeared in new places or failed to develop at all.

Unexpectedly, one of the scarab beetle species they examined also developed structures that looked like eyes in the middle of their head. And so in a study that was mainly about horns, the eyes stole the limelight. “Every time we presented the work people were really curious about it, because you know, it’s eyes–eyes have their own charm,” explained Zattara. “So I decided to go ahead and check … are these really eyes, or just something that looks like eyes?”

To explore these structures, Zattara’s group created a new batch of scarab beetles. They used a technique known as RNA interference (RNAi), in which double-stranded RNA is injected into an animal to silence a specific gene. As in their previous work, they injected scarab beetle larvae to target the otd gene, and demonstrated that the beetles again developed new eyes in the centers of their heads.

Using electron microscopy, the researchers then examined these eyes in detail, finding that the lenses were arranged in hexagonal arrays just like the beetles’ natural compound eyes. Immunostaining methods showed that the new eyes also contained cells that looked a lot like photoreceptors. And finally, RNA sequencing showed that they expressed genes involved in vision, and had a similar overall profile of gene expression to that of wild-type eyes.

However, Zattara’s team wanted to test whether the beetle’s third eye truly functioned like an eye. They knew that wild-type beetles reacted strongly to bright light by turning around and running away. If the third eye was functional, they surmised, then the beetles would make the same response even when they couldn’t see out of their normal eyes.

Preventing the beetles from seeing through their regular eyes wasn’t easy. The researchers ended up burning specific areas in the heads of larvae with a special needle normally used to remove moles from people’s skin. When the correct location was burned, the insects did not have eyes in adulthood. Eventually the group managed to produce 12 animals that only expressed a third eye but did not have normal eyes. Almost all reacted to the light, demonstrating that this new eye was indeed functioning.

According to Zattara, the research shows how resilient the developmental system can be to mutations that scientists might have predicted to have profound effects. “Your gene expression pattern might change a little… and you still are going to get an eye,” he said. “There are a number of things inside that will somehow compensate.”

Research into genes like otd that direct the development of whole organs could also be of use in biomedical research. For instance, these genes could help researchers who are developing miniature versions of organs to test drugs. “Even the simplest organ in an animal or plant takes a lot of things happening … we really cannot, on our own, direct the whole symphony of genes that you need playing in the right tune at the right time,” said Zattara. “But the fact that a lot of these things fall into place together on their own once you turn the right gene on makes it much easier.”

Zattara’s work could also open up the door for the study of complex traits in other insects. Although scientists had previously created ectopic eyes in the fruit fly Drosophila, this required genetic engineering that is only possible in particular model organisms. In contrast, the RNAi technique can be applied across a wide range of animals, a key consideration when examining the evolution of traits or differences between species.

“This is a particularly elegant study and the use of RNAi to remove otd is very powerful,” said Justin Kumar from Indiana University, who was not involved in the study. “The lessons learned from Drosophila may not be as generally applicable as I, or other Drosophilists, would like to believe … The ability to use RNAi in non-traditional model systems is a huge advance that will probably lead to a more balanced view of development.”