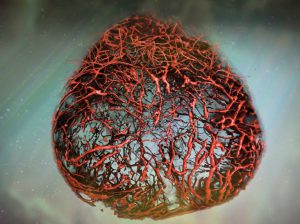 Organoids are 3D-models that are miniaturizing the world of anatomical research. Grown from stem cells, organoids mimic the cellular and anatomical make up of an organ and have been used to gain a greater understanding of the development and function of the body.

Adding to the list of organs that have been replicated, researchers from the University of British Columbia (BC, Canada) have developed vascular organoids, 3D human blood vessels that, when transplanted into mice, can develop into a fully functioning human vascular system that includes arteries and capillaries.

“Every single organ in our body is linked with the circulatory system. This could potentially allow researchers to unravel the causes and treatments for a variety of vascular diseases, from Alzheimer’s disease, cardiovascular diseases, wound healing problems, stroke, cancer and, of course, diabetes.”

“What is so exciting about our work is that we were successful in making real human blood vessels out of stem cells,” commented Reiner Wimmer, first author for the study. “Our organoids resemble human capillaries to a great extent, even on a molecular level, and we can now use them to study blood vessel diseases directly on human tissue.”

Despite affecting an estimated 420 million people worldwide, little is known about the vascular changes that occur due to diabetes. In trying to learn more, the researchers exposed their organoids into a ‘diabetic’ environment. A key feature of diabetes is the thickening of the vessel’s basement membrane, a feature mimicked by the organoids.

Following this observation, the team searched for compounds that could help in blocking the thickening process having found that no currently used anti-diabetic medication had an effect. They observed that inhibiting the γ-secretase enzyme prevented the thickening, potentially identifying a new target for diabetic treatment.

These results, published recently in Nature, show a great advance in research into the vascular system and have the potential to be used as a method of finding novel treatments for diabetes and other cardiovascular diseases.