As the Nobel Prizes are announced this year, BioTechniques will cover the winners of the Physiology or Medicine, Chemistry and Physics prizes, their stories and the impact of their research.

The 2020 Nobel Prize for Chemistry 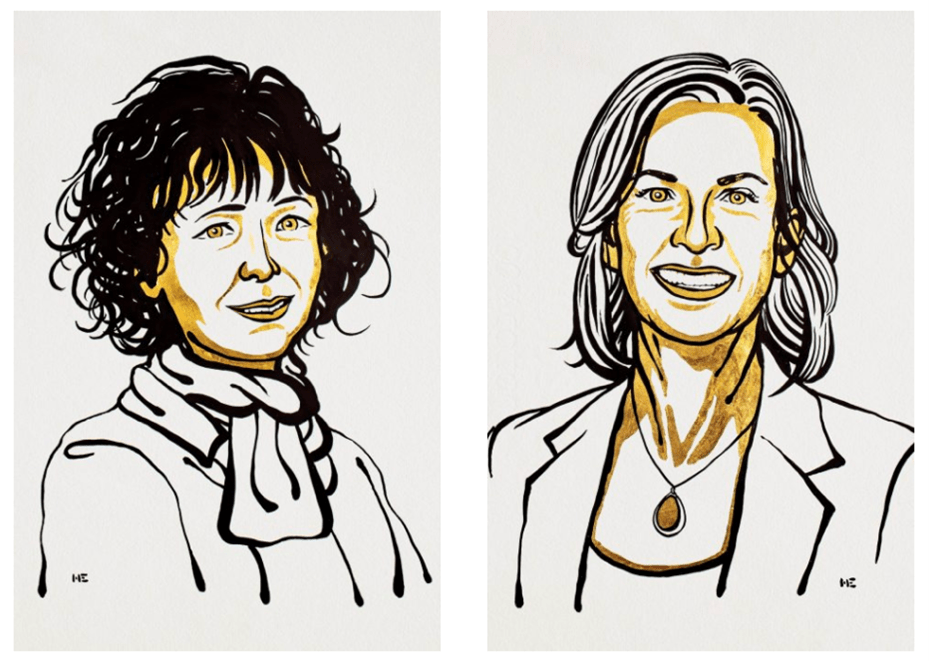 The Chemistry Nobel Prize will be written into the history books for a different reason this year as it became the first time two women have been jointly awarded the prestigious accolade. Emmanuelle Charpentier (Max Planck Unit for the Science of Pathogens, Berlin, Germany) and Jennifer Doudna (University of California, Berkeley, USA) have been recognized “for the development of a method for genome editing,” referring to their pioneering work on the tool, CRISPR—Cas9, which revolutionized gene editing.

After Charpentier’s initial discovery of the CRISPR—Cas system in Streptococcus pyogenes bacteria in 2011, she went on to collaborate with Doudna. They then replicated the system in vitro, simplifying and reprogramming it to cut any DNA molecule at a predetermined site.

Since its initial invention by Charpentier and Doudna in 2012, the CRISPR—Cas9 genetic ‘scissors’ have hit major headlines. The technology has great potential, already being a key element of many basic research discoveries. Additionally, CRISPR systems are currently being investigated as both a diagnostic and therapeutic tool in both oncology and infectious disease fields – including for COVID-19.

However, it has also been hit with controversy. He Jiankui (formerly Southern University of Science and Technology, Shenzhen, China) was jailed in 2019 for 3 years after he used a CRISPR tool to create the world’s first gene edited human babies – editing their DNA in an attempt to provide them protection against contracting HIV.

There has also been a long-running battle in the USA over who can claim ownership of the intellectual property rights to the CRISPR toolkit. Feng Zhang (Broad Institute, MA, USA) demonstrated the potential of CRISPR—Cas9 to edit DNA in mammalian cells just 6 months after its initial discovery was published. It is believed this is where the most profitable applications of CRISPR lie and hence is the subject of the unresolved dispute between the Broad Institute and University of California, Berkeley teams.

The 2020 Nobel Prize for Physics

This year’s Nobel Prize for Physics was again awarded to three researchers. Roger Penrose (emeritus professor at the University of Oxford, UK) received half of the award for “the discovery that black hole formation is a robust prediction of the general theory of relativity,” while the other half was shared by Reinhard Genzel (Max Planck Institute for Extraterrestrial Physics, Garching, Germany and University of California, Berkeley, USA) and Andrea Ghez (University of California, Los Angeles, USA) for “the discovery of a supermassive compact object at the centre of our galaxy.”

Penrose worked alongside Stephen Hawking, who passed away in 2018, and would likely have shared the award – the two shared the World Prize in physics in 1988 for their work on black hole singularities. He is a talented mathematician: famous for the Penrose diagram, a new way of portraying space-time and which was instrumental in our current understanding of black holes; and discovering Penrose tiles – a way to tile an infinite floor without repeating the pattern.

Genzel and Ghez have led research into Sagittarius A* – the monster at the center of our own galaxy – since the 1990s. The two have spent decades working with telescopes, developing new methods to see through interstellar gas and dust and to compensate for image distortion caused by our own atmosphere to get to the heart of what is lurking at the center of the Milky Way.

Ghez is the fourth woman to win the Nobel Prize in Physics, following on from Marie Curie, Maria Goeppert Mayer and Donna Strickland.

The 2020 Nobel Prize for Physiology or Medicine

Three researchers are the joint winners of this year’s Nobel Prize for Physiology or Medicine, each for their contribution to the discovery and early understanding of the virus hepatitis C. Harvey Alter (NIH, MD, USA), Michael Houghton (University of Alberta, Canada) and Charles Rice (The Rockefeller University, NY, USA) each made discoveries that acted as cornerstones for the discovery and subsequent treatment of hepatitis C.

Blood borne, chronic hepatitis was first identified as an issue back in the 1950s, when it was noticed that patients who had been administered several blood transfusions were far more likely to contract liver diseases that others. Hepatitis B was soon discovered in 1967 by Baruch Blumberg who later won a Nobel Prize for his work in 1976.

However, the identification and elimination of hepatitis B from blood banks did not lead to the significant reduction in hepatitis cases expected. Highlighting the importance of the issue at the time, Nobel Committee member Nils-Göran Larsson (Karolinska Institutet, Solna, Sweden) commented, “Before the discovery of hepatitis C getting a blood transfusion was like Russian roulette.”

The first of the researchers recognized in the award was Harvey Alter for his work methodically examining blood banks at the NIH. Screening blood samples for a huge variety of known viruses, Alter was unable to identify a single one in the blood samples suspected of containing an infectious agent. By demonstrating that blood from infected patients with the undetermined condition could lead to the condition in chimpanzees, Alter confirmed that there was a form of hepatitis distinct from hepatitis A and B.

Even after its existence was demonstrated by Alter in the 1970s, it was a decade before the virus was isolated by Houghton. Houghton took the blood of an infected chimpanzee and extracted nucleic acids, which he used to create a library of DNA fragments, suspecting the library curated to contain fragments from the virus. This library was then screened against the sera of hepatitis patients, theorizing that antibodies produced to combat the virus in the patients’ blood would isolate the cloned DNA fragments coding for viral proteins.

After identifying a single clone, the team was able to identify a novel RNA virus from the Flavivirus family, which was subsequently named hepatitis C. Houghton took his work to the next logical step, devising a blood test to detect the virus. Having shown this blood test to be effective, samples could finally be screened to establish if they contained the virus before transfusions were administered.

Before hepatitis C could aggressively be pursued as the target to prevent liver disease, it had to be established as solely capable of inducing hepatitis, as opposed to being an accompanying factor in the development of the disease.

Rice set out to examine this possibility, studying the virus’s genetics code until he found a highly conserved region in the 3’ end of the viral genome that he expected to be vital to viral replication. Noting mutations in several locations in the genomes of isolated viral clones and spotting that they may inhibit replication, Rice engineered an RNA genome of the virus containing the 3’ sequence and lacking the inactivation mutations.

After injecting this RNA into chimpanzee livers, Rice observed the onset of the symptoms of chronic hepatitis. This proved that hepatitis C alone could explain the cases of transmission-mediated hepatitis that had perplexed researchers for so long.

These discoveries each played a vital role in the subsequent development of highly sensitive blood tests and antiviral drugs to target hepatitis C. Now, 95% of treated patients can be cured of the infection. However, as the global number of hepatitis C cases currently sits at over 70 million and the disease is responsible for over 400,000 deaths a year, a lot more work needs to be done to deliver these lifesaving tests and therapeutics to all who need them.

Who’s won the Nobel Prize in Physiology or Medicine this year?

CRISPR upgraded from ‘scissors’ to ‘shredder’