Bats harbor epidemic-causing agents such as the SARS, Ebola, and Marburg viruses, yet remain asymptomatic after infection. Now, researchers have developed a new strategy for studying the secrets of the bat immune system. 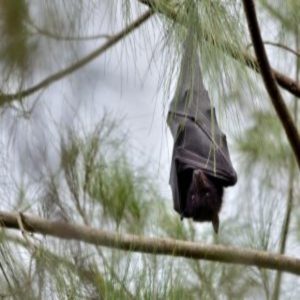 Bats’ unique biological features have fascinated biologists for decades, but in 2005, epidemiologists and immunologists started paying closer attention to these elusive animals when researchers identified them as the asymptomatic reservoir for the virus causing severe acute respiratory syndrome (SARS) (1). That same year, scientists discovered that these small mammals are also the reservoir for another feared virus: Ebola (2).

While biologists often turn to well-established animal models such as mice, rats, flies, or worms to make inferences about human biology, bats are starting to gain traction as experimental models, especially for researchers interested in unlocking the secrets of their exceptional immunological defense mechanisms. Most animal models have short generation times and little genetic variability, enabling scientists to quickly pinpoint the biological factors shaping a phenotype of interest. But bats don’t reach sexual maturity until 3 years of age, and they rarely have more than 1 or 2 offspring per litter. Bat colonies are therefore hard to sustain and are usually too small to carry out experiments. Now, a team led by Linfa Wang from Duke-NUS in Singapore has developed a method for growing immune cells derived from bat bone marrow to bypass this experimental hurdle (3).

“Bats are less prone to cancer, live long, and can carry viruses without getting sick. The phenotypes are likely linked,” said Wang. “This was really the trigger for us to focus on bat immunology in particular and on bat biology in general.”

Among the twenty researchers in Wang’s lab, over half have projects that require a bat animal model. “Our group was in urgent need of deriving [bat immune] cells, and we were lucky enough to have the funding,” shared Wang.

“We tried to take advantage of the well-established mouse [protocol], but it did not work,” Wang said. The researchers overcame this obstacle by cloning bat cytokines and adding them to the growth medium. Three cytokines were key for growing bat immune cells: granulocyte-macrophage colony-stimulating factor, interleukin-4, and FMS-like tyrosine 3 ligand.

The biggest challenge was keeping the bone marrow in good condition between collection in the field and arrival in the lab. “We still see quite a bit of variation from batch to batch and are in the process of working out whether this is due to individual or [sample] processing differences,” said Wang.

With the cell cultures they established, the team used CRISPR/Cas9 to knock out interferon receptor 2 in bat immune cells and unexpectedly identified a unique link between interferon-regulated genes and cancer not seen in other mammals (4). Wang now plans to carry out comparative immunology experiments aimed at better understanding how bats deal with biological stressors such as DNA damage, mitochondrial damage, inflammation, and apoptosis.