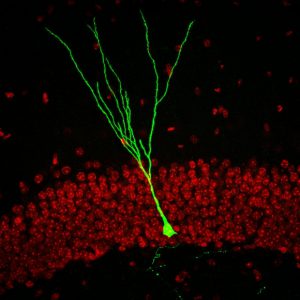 A new four drug combination therapy has been developed that could help restore neuron function by converting existing glial cells, adjacent to damaged or dead neurons, into healthy new neurons. The research behind the discovery was led by Gong Chen (Penn State University; PA, USA) and could prove pivotal in the treatment of an assortment of neurodegenerative disorders.

The research team set out to address one of the key stumbling blocks in the treatment of neurodegenerative disorders. As Chen explains: “The biggest problem for brain repair is that neurons don’t regenerate after brain damage, because they don’t divide.”

In order to address this issue, Chen and his team turned to another type of brain cell to provide a solution to the problem. “Glial cells, which gather around damaged brain tissue, can proliferate after brain injury. I believe turning glial cells that are the neighbors of dead neurons into new neurons is the best way to restore lost neuronal functions,” hypothesized Chen.

Chen has previously been involved in efforts to achieve this cellular transformation by gene therapy and a prior molecular approach. However, the gene therapy required significant expenses, US$500,000, and a very complex procedure while the previous molecular approach involved nine separate molecules that had to be administered in a specific sequence, which was too complex to be translated into a clinical treatment.

"My ultimate dream is to develop a simple drug delivery system, like a pill, that can help stroke and Alzheimer’s patients around the world to regenerate new neurons and restore their lost learning and memory capabilities.”

Going back to the drawing board, the researchers tested a number of disparate combinations of molecules to find a more streamlined method to convert the cells and restore neuron function.  Jiu-Chao Yin, first author on the paper, explained the process: “We identified the most efficient chemical formula among the hundreds of drug combinations that we tested. By using four molecules that modulate four critical signaling pathways in human astrocytes, we can efficiently turn human astrocytes, as many as 70 percent, into functional neurons.”

The research team found that the transformed neurons could survive for over seven months in a culture dish and display healthy and robust neuron function. Using three of the four molecules produced similar results but only yielded a transformation rate of 50%. This simplified drug cocktail improves the likelihood of translating this pre-clinical research into clinically effective therapeutics.

Chen is optimistic about the potential of this research, declaring that “the most significant advantage of the new approach is that a pill containing small molecules could be distributed widely in the world, even reaching rural areas without advanced hospital systems. My ultimate dream is to develop a simple drug delivery system, like a pill, that can help stroke and Alzheimer’s patients around the world to regenerate new neurons and restore their lost learning and memory capabilities.”

Alongside addressing the complex issues of how to package and deliver this drug combination, Chen and his team will also need to investigate the potential side effects of the treatment in further studies. Nevertheless, this research provides a glimpse into the potential future treatment of neurodegenerative disorders and is another step in the pursuit of neuron repair.