Western blots can often be overlooked as a commonplace research tool in proteomics, but there have been continual updates and progress in the technical development of the western blot and the list of the technique’s capabilities makes it invaluable.

The sensitivity of the technique has increased due to advances in fluorescence and chemiluminescent reagents. Increased practicality owing to the recently developed ability to automate the process is reflected by the improved reproducibility that results from the introduction of more reliably validated antibody reagents. The combination of this sharpened sensitivity, elevated practicality and refined reproducibility has kept the technique relevant since its inception in 1979. [1]

Here we take a look at the application of this technique in two of the most fast-paced and detailed fields of research: pain management and cancer.

In a recent study published in British Journal of Anaesthesia looking into the mechanisms of neuropathic pain resulting from central or peripheral nerve damage, researchers from Nanjing Medical University (Jiangsu, China) utilized western blots as a key aspect of the study.

The research team set out to discover if the receptor tyrosine kinase-like orphan receptor 2 (ROR2) played a role in regulating the cadence of neuropathic pain.  The study utilized von Frey filaments and radiant heat to measure mechanical allodynia, painful sensations caused by light stimuli; and thermal hyperalgesia, the heightened perception of temperature. These often lead warm or cool stimuli to be perceived as painful, respectively.

Due to western blots’ invaluable ability to detect protein modifications, the technique was selected to monitor the phosphorylation status of proteins in the neurons, while immunofluorescence staining was deployed to monitor the expression of ROR2. This, therefore, allowed the researchers to monitor both the prevalence of ROR2 but also the potency and impact of its tyrosine kinase activity in response to stimuli.

A chronic constriction injury (CCI) model was utilized to induce neuropathic pain in mice, with L5 spinal nerve ligation performed on the experimental group. A control group underwent a sham surgical procedure where the nerve was exposed but not ligated. The two behavioral presentations of neuropathic pain tested were thermal hyperalgesia and mechanical allodynia. As well as regular behavioral testing to determine pain sensitivity, protein samples were taken from the mice and run in a western blot. Blots were incubated with antibodies against ROR2, phosphotyrosine, phosphoserine and β-actin as well as seven different subunits of the N-methyl-D-aspartate (NMDA) receptor.

The study found that ROR2 mRNA was increased in spinal neurons following CCI. Tyrosine phosphorylation of ROR2 was also seen to dramatically increase in the days following the CCI.

Using western blots to study the phosphorylation of NMDA receptors, the team demonstrated that demethylated ROR2 in the spinal cord may be implicated in the regulation of neuropathic pain via phosphorylation of the GluN2B NMDA receptor subunit. This suggests a novel mechanism for the modulation of this form of chronic pain and may present a potential therapeutic target, highlighting the vital role of western blots in groundbreaking research. [2] 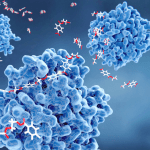 In a study published last year in Technology in Cancer Research and Treatment, researchers from the University of Cologne (Germany) demonstrated the potential application for western blot analysis as a tool for determining IDH1 mutation status in progressive gliomas.

The researchers collected and analyzed 113 tumor samples from 84 glioma patients. DNA sequencing was performed to confirm the presence of an IDH1 mutation. They then assessed quantitative and qualitative expression of IDH1 mutations using real-time PCR and western blot analysis techniques, respectively.

The study suggested that western blot analysis could be a useful tool for accurately assessing IDH1 mutations in glioma patients in the clinic. This could provide a quick and cost-effective method for aiding accurate diagnosis and treatment decisions. However, further research is needed to validate IDH1 mutation status as a biomarker for the disease before the true extent of its usefulness can be known. [3]

The researchers collected 73 paired NSCLC samples and their adjacent non-cancerous tissues and analyzed the expression of OTUB2 and O2AF2, two proteins previously discovered to be deubiquitinating enzymes in NSCLC cells, through western blot analysis and real-time PCR. They then analyzed the correlation between the expression of the genes and clinicopathological features of NSCLC progression.

It was observed that the enzyme OTUB2 was significantly upregulated in NSCLC tissue samples compared to the non-cancerous samples. It was also found that a high expression of OTUB2 in NSCLC tissues was associated with tumor metastasis, poor survival and recurrence. Similar findings were observed for O2AF2.

The study provided evidence that OTUB2 is an important driver in NSCLC tumorigenesis and suggests that it could act as a novel prognostic indicator and therapeutic target in NSCLC treatment. Western blot analysis provides opportunities to glean more insight into genetic factors of tumorigenesis, which, if utilized, could spur the discovery of many more successful therapeutic targets. [4]

The secret life of proteins