Researchers have grappled with treating sickle cell disease for over 65 years. Has gene therapy finally provided a cure? 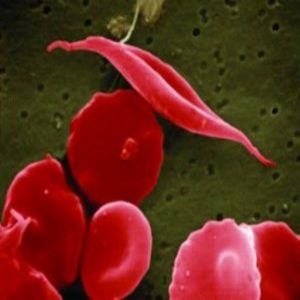 For teenager Alexandria, sickle cell disease is an unwanted constant in her life. “The pain is so bad—it’s like a hammer beating you,” she said. She is not alone, there are over 70,000 Americans with abnormal sickle-shaped red blood cells flowing through their vessels.

Caused by a mutation that affects beta-globin, a subunit of hemoglobin, the unusual shape of the red blood cells has a double pronged effect. First, less iron is taken up, leading to anemia, and low haemoglobin reduces the quantity of oxygen pumped around the body. The sickle shape also instigates vessel blockages, causing excruciating pain and organ damage. While those in developed countries can manage the symptoms, infant mortality in sickle cell sufferers in Africa stands at 50%-90% (1).

Every month, Alexandria must undergo a lengthy blood transfusion in the hope of reducing her risk for stroke. The only cure is a stem cell or bone marrow transplant, a high-risk procedure also hampered by a low probability of finding a matching donor. Fortunately, the single Mendelian mutation causing the disease is an ideal candidate for gene therapy. For the past few decades, gene therapy has been touted as treatment for everything from HIV to dysfunctional nervous system cells—but how much progress has been made?

Gene therapy seems inextricable from the “hype cycle.” An initial peak of expectation follows a promising breakthrough; then this gives way to disillusionment when it becomes apparent that more time, money, and effort are needed for success. The cycle repeats.

Current clinical achievements seem to be limited to rare genetic disorders, and even these successes are limited. Glybera is currently the only licensed gene therapy available; it restores the activity of a particular enzyme to treat a rare disorder where individuals are unable to process dairy products. However, the therapy does not totally eliminate symptoms, and there is significant patient intra and inter-variability (2).

Recently, new research published in the New England Journal of Medicine made waves within the popular science press. In this study, researchers led by Jean-Antoine Ribeil from Necker Children’s Hospital, Paris used gene therapy to seemingly completely cure a teenage boy of sickle cell disease (3). Will this gene therapy break out of the hype cycle?

A Cure for All?

To treat sickle cell disease, the trans-Atlantic team extracted bone marrow stem cells from the patient and used a lentiviral-based vector to insert an anti-sickling beta-globin gene. These treated stem cells were then placed back into the patient’s body with the hope that the bone marrow would produce red cells that did not clump together.

To the delight of the team, the patient began to produce large quantities of healthy hemoglobin. “The patient is now 15-years-old and free of all previous medication,” said Marina Cavazzana the lead researcher from Necker Children’s Hospital in Paris. “He has been free of pain from blood vessel blockages and has given up taking opioid painkillers.”

Adverse side-effects are a big concern when testing new gene therapies. Previous tests where patients contracted leukemia during clinical trials (4) tragically speak for themselves. However, past experimental techniques often involved using retroviruses as a vector. The lentivirus used in the new study had no reported oncogenesis, and ongoing studies using the same vector to treat other blood diseases so far show a consistent safety profile.

“The use of the lentivirus has been critical in driving success for gene therapy,” said Punam Malik, Director of the Cincinnati Comprehensive Sickle Cell Program, who was not involved in the study. “Retroviruses took a big hit due to their insertional mutagenesis and leukemia. Lentiviruses have a different integration system, which helps to eliminate this risk.”

While this advance is exciting, the headlines of stories covering it have shied away from something only mentioned when the researchers presented their work at the 57th American Society of Hematology “This very group has treated several patients so far and only one is cured, but the rest are not published,” said Malik. “Of course, the first success merits a big-bang, but the failures should also be published. I feel it would be more honest. The reasons why they didn’t succeed could help move research forward.”

In a commentary article published in Nature, Malik discusses why some of those gene therapy attempts failed (5). In the unsuccessful cases, fewer stem cells were grafted, highlighting the importance of a more potent dose. However, these higher doses may not be feasible, especially when translating the procedure on a global scale. “High-intensity treatment can cause toxicity, and this can fatally compromise an individual’s immune system—especially when they are already vulnerable. This kind of treatment may cure 1 individual; it may cure 200. But that is the tip of the iceberg when it comes to sufferers in less developed countries, where this high intensity and expensive therapy would not be feasible.”

New Kid on the Block

There is more than one way to skin a cat in the gene editing world; CRISPR/Cas9 regularly features in headlines promising exciting molecular breakthroughs. This highly specific editing system can cut and edit almost any DNA sequence using the Cas9 enzyme. “CRISPR/Cas9 can provide much more localized editing than lentiviruses, which integrate randomly,” said Malik.

“CRISPR/Cas9 shows a lot of promise, but this was also the case with lentiviral vectors a decade ago and retroviral vectors long before that,” said Malik. “While progress is being made, I believe we will have to go through numerous setbacks with CRISPR/Cas9, but we will only become aware of these obstacles as we continue to research.”

Some of these obstacles revealed themselves in research using the CRISPR/Cas9 system to study ways of editing out sickle cell disease in patients. One article recently published in Science Translational Medicine describes how researchers successfully corrected the sickle cell mutation in mice (6).

In vitro studies found a 25% efficiency repair rate for the defective genes. However, the team reached some difficulties when using a mouse model, where the repair rate stood at just 5%. “This is right at the threshold of what might be required to alleviate patients’ distress,” said Corn.

“These results can be up-scaled, which is what we are doing in our lab with lentiviral vectors,” said Malik. “However, a major barrier that also needs to be tackled with CRISPR/Cas9 is the method of delivery. It is electroporation-based, and the very reason viral vectors were developed was because electroporation techniques are very toxic to stem cells. And now we are going a step backwards because we are using transvection-based technology.”

While gene therapy advances are so often reported as “breakthroughs” or even as “miracles,” caution is always advised when looking at technologies entrapped within a hype cycle. While results are incredibly promising, Malik argues that we still face major challenges.

Only one individual so far is asymptomatic of sickle cell disease, although further clinical trials are ongoing. “Reduced toxicity through less intensive stem cell extraction is the only way that this medicine will be translatable to a global audience,” said Malik.

“Hopefully the next 5 to 10 years will bring about treatment with less toxic regiments, with CRISPR/Cas9 also reaching clinical trials. If we see off the shelf treatment with minimal outpatient conditioning in my lifetime, I will be incredibly happy!” said Malik.